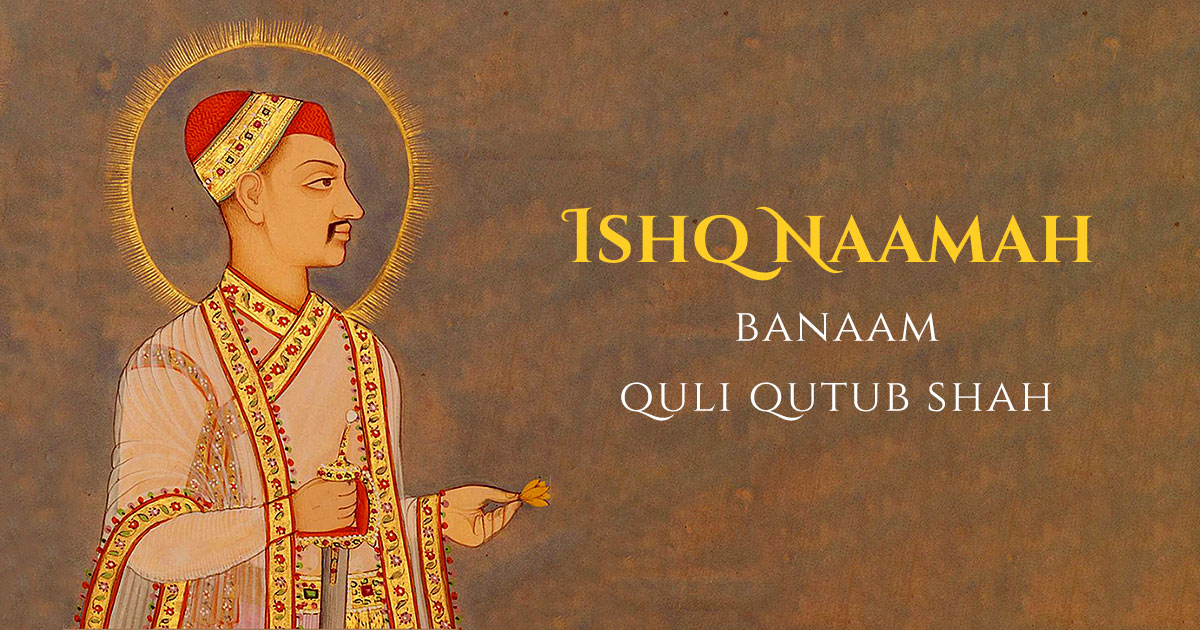 Quli Qutub Shah loved his flora and fauna, his people, and himself; he adored his romantic icons and eulogised them in his poetry. 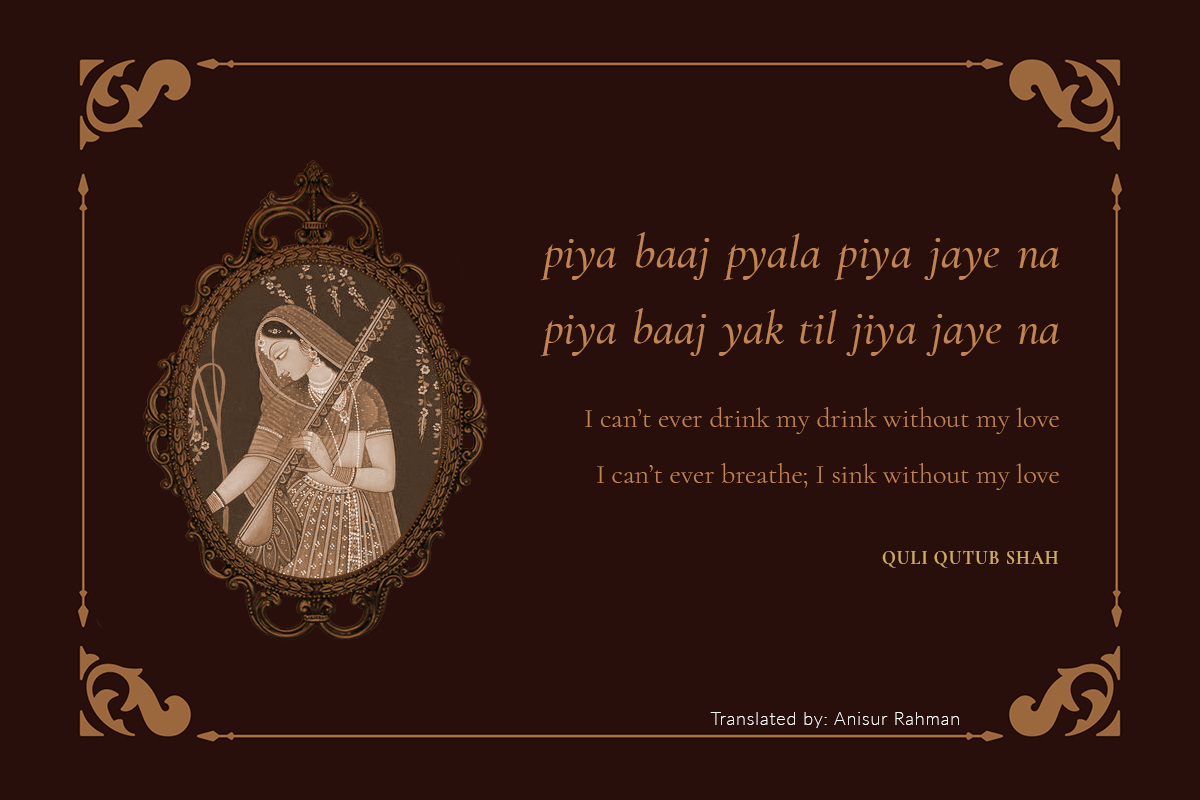 One who wrote Piya baaj pyala piya jaye na/Piya baaj yak til jiya jaye na was indeed the poet who loved all the way. He loved his flora and fauna, his people, and himself; he adored his romantic icons and eulogised them in his poetry. Love was surely a way of life for Qutub Shah; it was a condition for living. Although the tales of his love have gone down in history both as myth and reality, but there is a general agreement that he did love and eloquently praise his beloveds who were more than one. 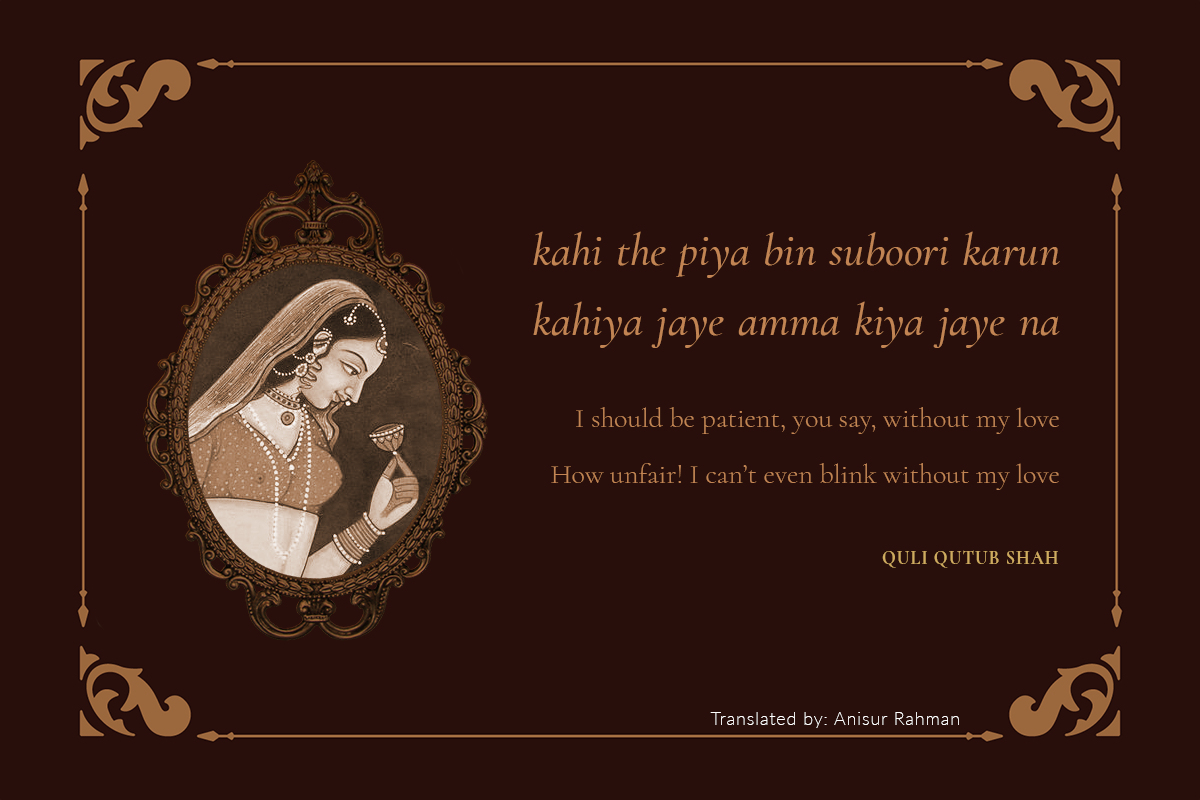 One is often reminded of Qutub shah’s many beloveds whom he has unreservedly immortalised in his poetry. They were twelve of them–Nahni, Sanwali, Kanwali, Pyari, Gori, Chchabeeli, Laalaa, Laalan, Mohan, Mehboob, Mushtari, and Haider Mahal. For each one of them he wrote impassioned verses. But there were others as well– Bilqees Zamaani, Hatim, Bahmani Hindu, Hindi Chchori, Padmini, Sundar, Sajan, Rangeeli, and Noor ki Moorat. One wonders if they were the figments of his poetic imagination, or were real–as real may be in flesh and blood. If poetry could be a witness to life, which it is the case of Qutub Shah, one may testify that they were the ones whose beauty he adored, whose enticing manners he cherished, and whose enticing company he craved for. These women of good luck gave the Sultan their companionship in all the twelve months of the year in private and public.

The love story of Qutub Shah with the ravishingly beautiful Bhagmati has been a subject of curiosity for ages now. Their story has long been shrouded in mystery. Some thought she was more of a myth than reality, others insisted on her being an actual figure of enough substance. Bernier, Tavernier, and Careri refer to her in their travelogues, as do Abul Fazl in Akbar Naamah and Faizi’s in Lateefa-i-Faiyyazi. Farishta too mentioned her in his Tareekh-e-Farishta. Although Faizi and Farishta referred to her rather uncharitably as an unchaste woman but Mulla Wajhi, the court poet of Quli Qutub, eulogised her as Mushtari in her remarkable poetical composition, Qutub Mushtari.

Bhagmati is said to have been born at a place called Chechlam, today’s Yakutpur near Hyderabad. where she happened to be a temple dancer in the devadasi tradition. The Sultan had seen her temple dance and met her on one of his hunting trips. He got deeply infatuated and started craving for her. The legend goes that in a moment of intense hankering (feels like hunger sounds negative,) he set out to meet her. The night was stormy and the Musi river furiously flooded but his passion saw him cross it and reach his beloved. Quli Qutub won her favour and took her as his wife. In appreciation of her being and beauty, he founded a city called Bhag Nagar after her. Later, when Bhagmati was renamed as Haider Mahal, Bhag Nagar was also renamed as Hyderabad. 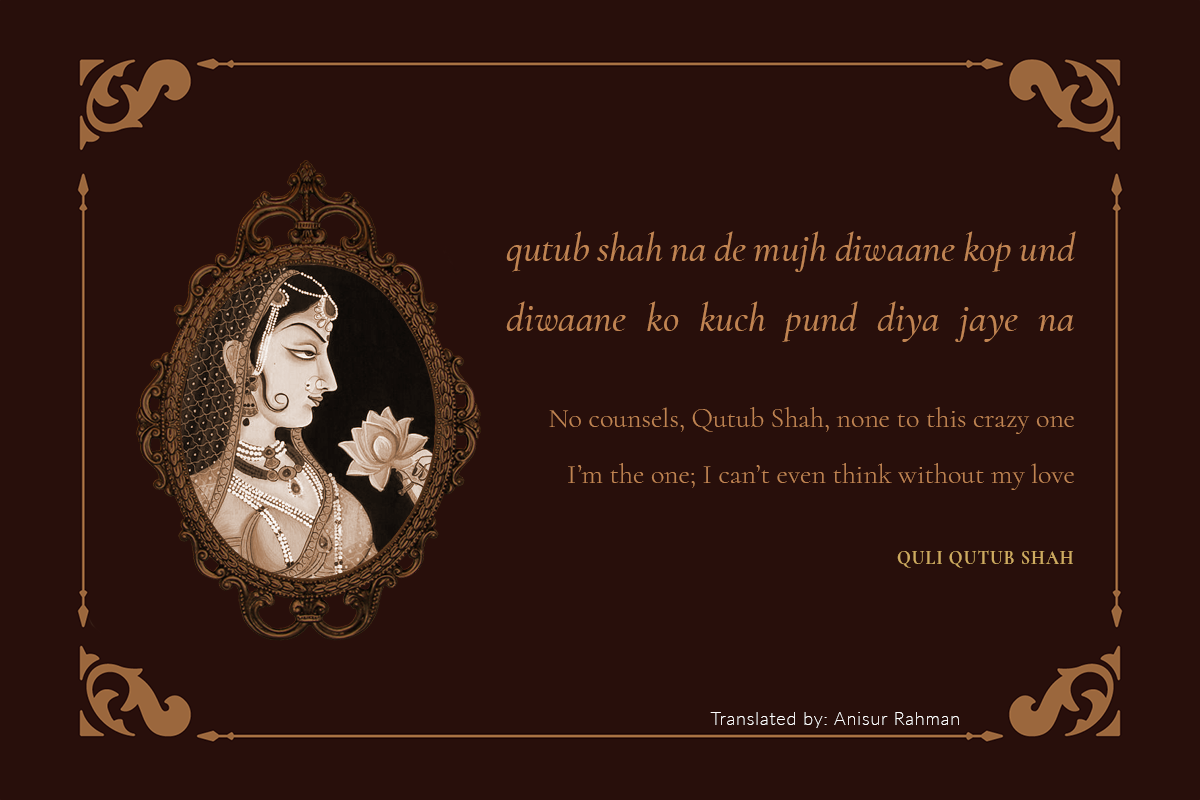 A kind hearted ruler and a great patron of arts and architecture, Abul Mozaffar Mohammad Quli Qutub Shah was the fifth ruler of the Qutub Shahi dynasty of Golconda. He wrote in Persian, Telugu and Deccani and is credited with being the first poet with a complete Divan to himself where he celebrated his life and times in all its astounding variety. Love, of course, emerges there as a constant refrain.