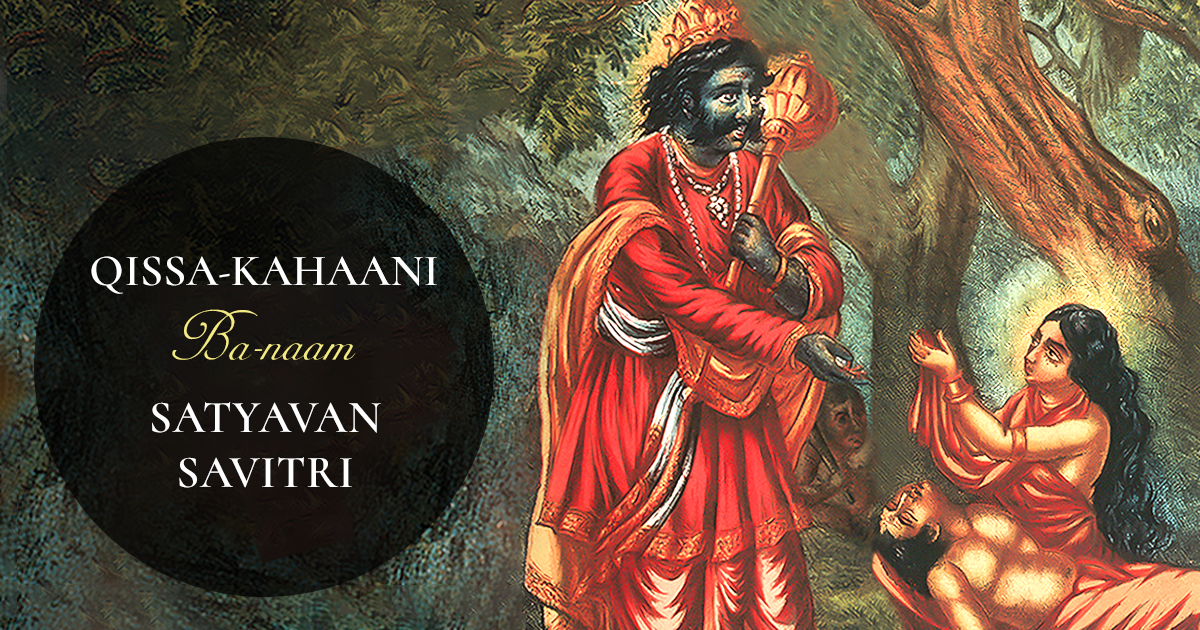 In Urdu, the story of Satyavan and Savitri was presented in the form of a drama by Mohammad Abdul Aziz Fayeq and Mohammad Ibrahim Mahshar Ambalavi. Later, it was presented as a poetical narrative by Jigar Barelvi who appropriately called it Payaam-e-Savitri. Written in 1930, this fascinating piece of a poem was, however, published twenty-four years later in 1954. Ever since it has stayed on as a story of desire and fulfilment with many a message of hope and faith.
Savitri was the only daughter of raja Asvapati of Madra Kingdom. As she grew in years and gathered grace, she also bloomed as the most beauteous being around. The story of her unmatched beauty and splendour reached far and wide.

With Savitri growing into an adolescent, her father thought of finding a bridegroom for her. He sent his Brahmins and messengers all around in his kingdom to find a suitable match. The effort proved futile as there was none who could dare take her as a bride for all of them were awe-struck by her fabulous beauty and awesome splendour. At last, the anxious father wanted Savitri to go on a pilgrimage herself which, he thought, might get her a life-partner:

Savitri respected her father’s wish and set out on her mission. She took her companions along with her and rode a chariot for an unknown destination that might bring her a bridegroom somewhere on the way. After a long journey and many destinations past, she ultimately reached a place where she spotted a paragon of loveliness in appearance and manners. This was none else but Satyavan himself. She shied and blushed even as she was instantly enthralled by his presence before her. It seemed as if she had finally struck a chord with one who was destined to be her soul-mate:

Satyavan was the son of raja Dyumatsena of Salwan kingdom who had, unfortunately, turned blind. Satyavan, the loving son, had found a refuge in the jungle and had devoted himself praying to gods for the restoration of his father’s vision. Fully convinced that she had found her soul-mate, Savitri returned home to share the good news with her parents. When she reached home and broke the good news, the parents felt blessed but this moment of utter joy did not last long.
This is where the story grew grim. The far-sighted rishi Narad who happened to be there and listened to Savitri, said remorsefully that she had made a wrong choice. He said so since he knew that Satyavan was destined to live but only for a year, and no more. The worried father could not have allowed Savitri to risk her life. So, he earnestly asked her to give the forecast a serious thought and make another choice. That was, however, not to be as the resolute Savitri had already taken her unbreakable decision of entering into a marital bond with one she had struck an instant but perennial bond. She said:

Ignoring the fearful prediction, a steadfast Savitri entered into marital bond with Satyvan in all pride. She shed her royal attire and disengaged from her identity as a princess, or even a bride. Indeed, she was worried from within and was constantly preoccupied with the rishi’s prediction about the short life-span of Satyvan. She kept fasting and praying to avert what was so cruelly foretold. As time drew closer to the destined day, she stood firm to face it.
The story took a turn from here. One day, Satyavan went out to collect woods in the forest. A worried Savitri could not have seen him going alone. She accompanied him like a loving caretaker. Completely unaware of what was foretold about his lifespan, Satyavan enjoyed his zestful spirit with Savitri on the way. Torn between her love for him and the prospect of losing him in no time, she tried her best to put up a brave face. As the beautiful evening started descending, they reached a place where Satyavan climbed a tree to cut a few branches for firewood. It so happened that suddenly, he was overpowered by a sudden attack of severe headache. He faltered and fell down from the tree. This was the ultimate moment of Savitri’s test. She took complete control of herself, put Satyavan’s head in her lap and gave a gentle massage. By this time evening had started deepening and animals had started howling. This is when the Yamraj appeared on the scene to take away Satyavan’s life. He did what he came for and left but Savitri followed him at his heels. Yamraj tried to help her see sense and told her that she had conducted herself well as a wife and a woman and now she must disengage herself from the worldly matters. Fearlessly and confidently enough, Savitri offered a bold reply to him:

A stunned Yamraj asked her to wish for anything she wanted except for her husband’s life. Instantly, Savitri asked first for the vision of her blind father-in-law. Her wish was granted. Then she continued with her other wishes and Yamraj granted them as promised. In granting one of her wishes, the Yamraj had said that she would mother a hundred children. Here, Yamraj was caught at his wit’s end. So, as he took steps to take leave of Savitri, she overtook him and impressed upon him the virtues of a faithful and righteous wife. Then she finally made her undeniable plea that how could she give birth to hundred children if Satyvan is dead. Yamraj found himself in a queer position and realised that he had lost his case. A helpless Yamraj, had no way left for himself. He returned Satyavan his life that he had taken to his control a while ago. Savitri’s conviction and her pure love brought her victory over death and also restored her father-in-law’s vision to him. This incredible story from the Mahabharata remains a point of many references till this day.