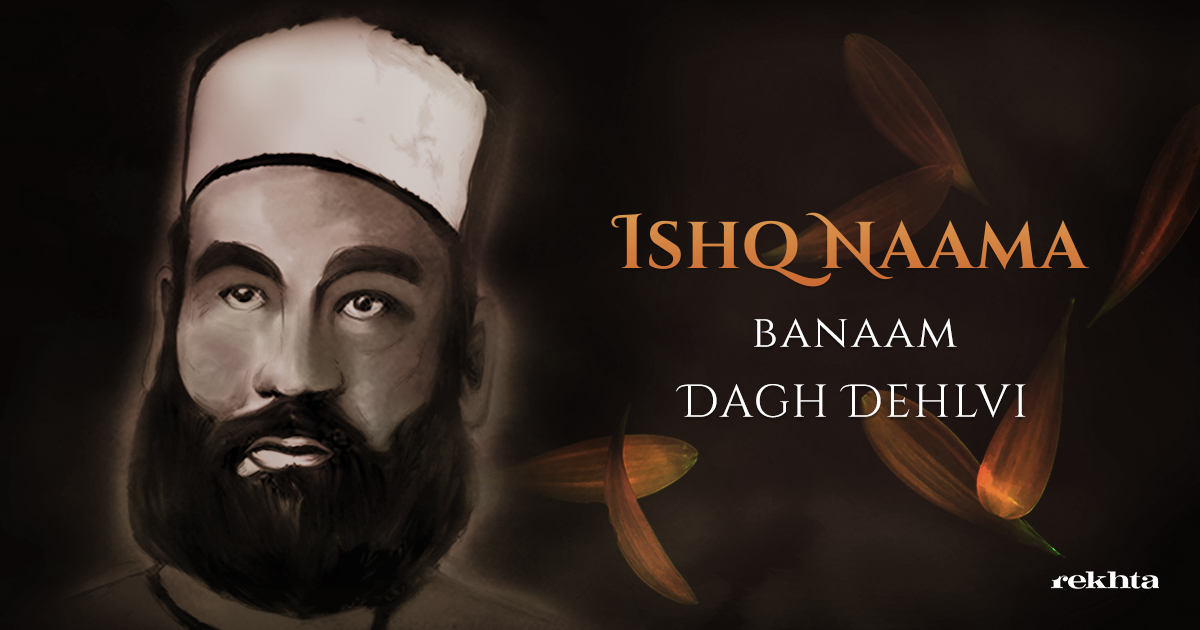 Dagh Dehlvi lived a life of pain and pining in love. He left behind a treasure-trove of love poetry but did not experience the blessings of love. His coffer was empty; he only knew of an illusory love and died with a wish for turning that illusion into a reality.

One has often heard that love is blind and that it brings only misery. If this be true, this must be true in the case of Dagh Dehlvi. Dagh was a man of colourful disposition and craved for the company of the beauteous beings. As his luck would have it, he came across a young and beautiful lady known as Munni Bai at the unique annual fair of Rampur appropriately called Benazir. Munni Bai was a courtesan and she had travelled all the way from Calcutta to Rampur to enjoy herself at the fair which promised impressive spectacles to its visitors from far off places. Dagh fell for her as he loved her looks and Munni Bai fell for him as she loved his poetry. Inflamed in love, Dagh expressed himself unreservedly in his masnawi Faryaad-e Dagh which has immortalised both Dagh and Munni Bai: 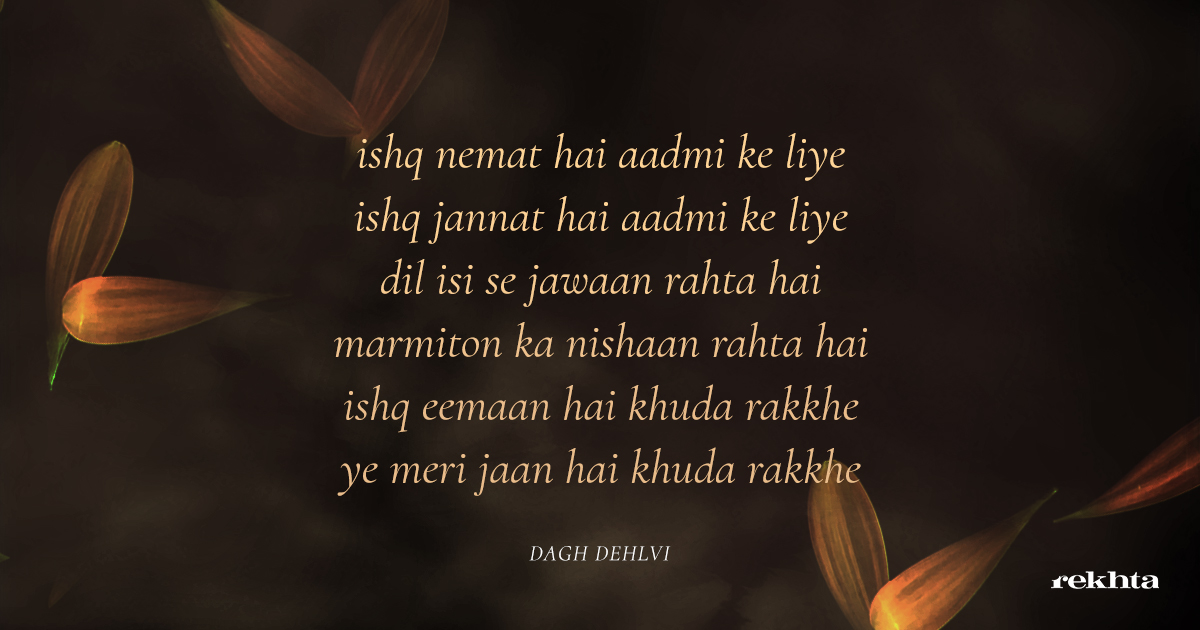 Another reason for Dagh to be enamoured by Munni Bai was that she too was a poet of considerable merit. Interestingly, this courtesan-poet chose “Hijab” for her pen-name which meant “veil” and a veil, as one knows, does not allow anyone to cast a glance at the face. Yet Dagh saw her, as did others, in great admiration. Hijab stayed for some time in Rampur but once the fair was over, she had to leave. She did leave indeed and left a lover behind pining for her. As they separated they took vows, as lovers do, to remain committed in their love and keep in touch through letters. Dagh recorded this moment: 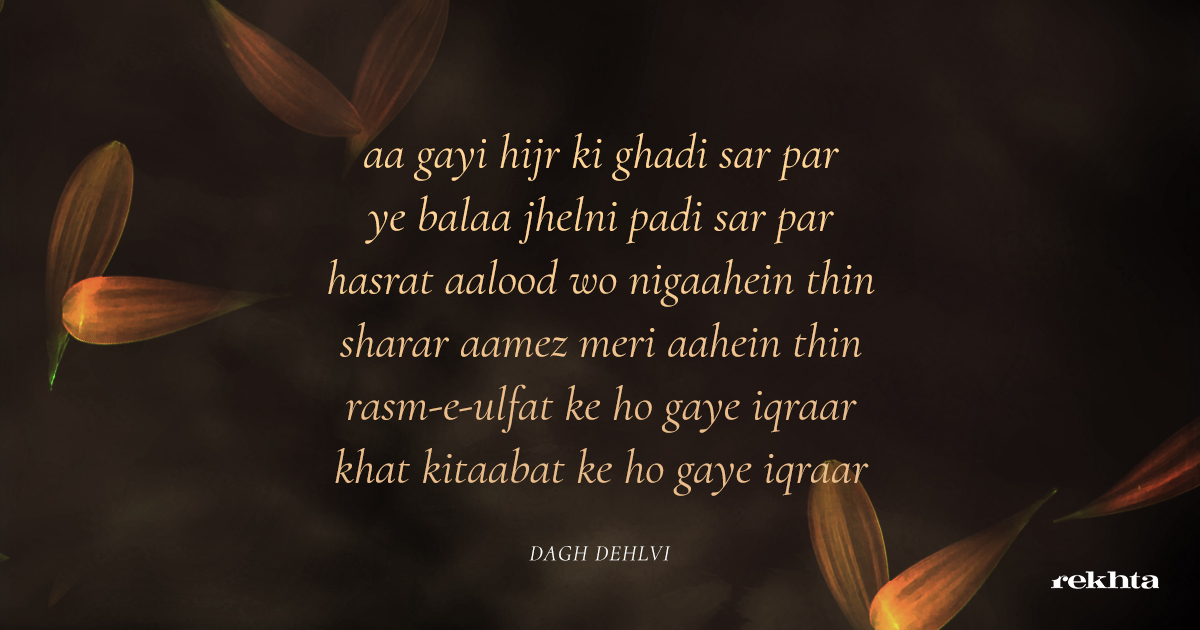 Bit by the love-bug in the same measure, Munni Bai too wrote an equally passionate verse on this occasion: 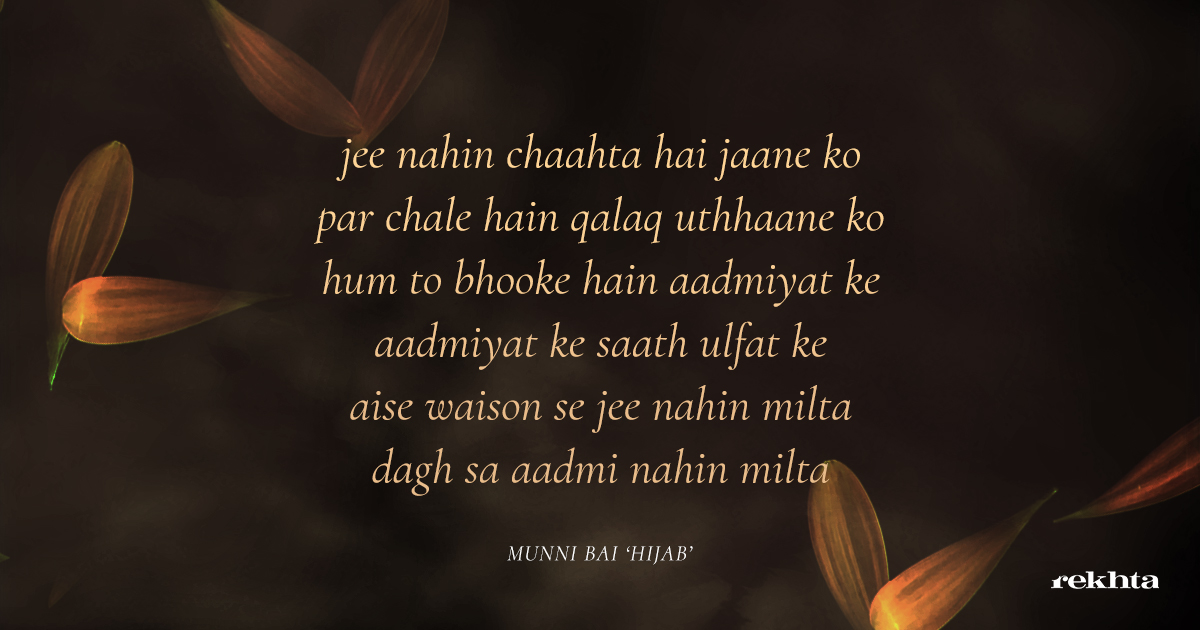 Separation weighed too heavily on their hearts but they continued exchanging letters to assuage themselves as much they could. In one of his letters, an impatient Dagh complained ruefully that she was writing less frequently now and that he did not receive even two letters every week, as promised. In utter desperation, he even wrote that he would consume poison and die if she did not meet her promise. He grew obsessive and kept looking for people who came from Calcutta so that he could ask about her. This hardly brought any solace to him. Luckily for him, the Banazir fair was approaching. Dagh invited Munni Bai in March 1881 to the Benazir fair. She came back and Dagh celebrated their reunion: 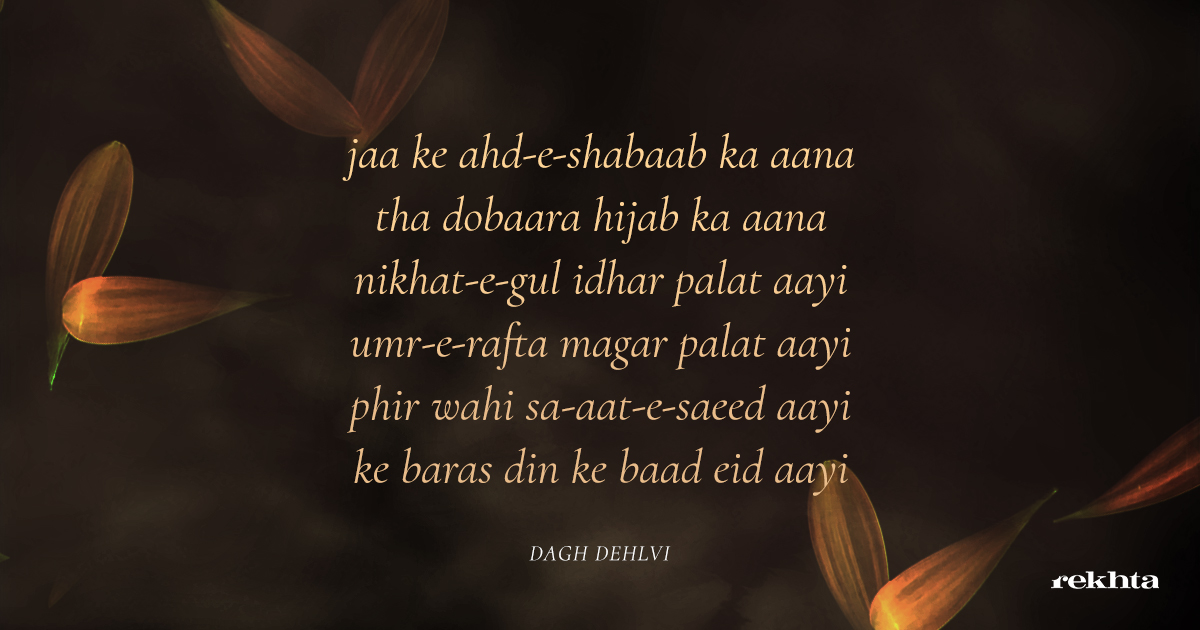 It is rightly said that love between two sometimes attracts jealousy from others. This happened in their case as well. Some disgruntled ones approached Munni Bai and spoke ill of Dagh. The trick worked well and she became angry with him. She shunned his company and sulked for some time but Dagh, being a persistent lover, won her back. Between these acts of romancing and sulking, came the time for the Benazir fair to be over. Munni Bai had to leave Rampur again; and again they were destined to suffer in separation. As she prepared to go, she chose to invite Dagh to Calcutta. It was his turn now to accept her kind invitation which he heartily did. He set out on his long journey to Calcutta via Delhi, Lucknow, Azimabad (now Patna) and reached there in June 1883. Dagh found a place separately for himself on rent opposite the historic Nakhuda mosque where he was well received by those who admired his poetry. He stayed there for three months in close companionship with her. But the three months passed too soon to be followed by another phase of separation. An exasperated Dagh lamented: 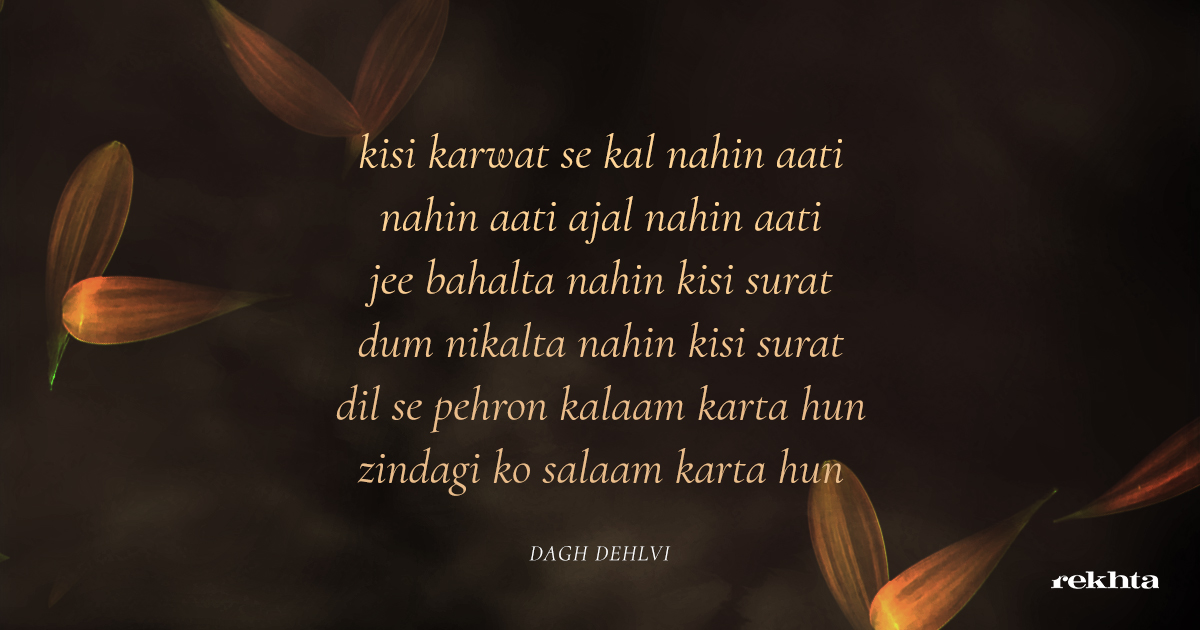 Here came a turning point in Dagh’s life with the demise of Nawab Kalbe Ali Khan of Rampur in March 1887. He got dismayed and chose to leave Rampur. A few months later he came to Delhi with which his name has ever remained associated. He did not, however, stay here for long and left for Hyderabad where he chose to stay for the rest of his life. This was the time when life’s worries occupied him more than the thoughts of Munni Bai but love being love knows no way of perishing. In 1899, the Nizam of Hyderabad set out for Calcutta on a personal trip and he chose Dagh, the respected poet, for a company. This journey brought back the memories of Munni Bai to him with full intensity. He tried to find her whereabouts and came to know to his utter dismay that Munni Bai, the courtesan, had chosen a maulvi (or the maulvi had chosen her) for entering into a marital relationship. Munni Bai had turned religious and distanced herself from the old ways of her life. This shocked him and he suffered immeasurably as he could not meet her. Seeing him in great pain, a close acquaintance of both Munni Bai and Dagh approached Qazi Abdul Hameed and asked him to persuade Munni Bai to divorce her husband and marry Dagh who would love her more than any other person. Even Dagh wrote several letters to Qazi sahib and passionately pleaded that he must get Munni Bai back. In one his letters he even said that he had grown old and that she too was not as young as before, so if she joined hands, both would live happily. He also added that even if he had grown old but his love for her was as young as ever, and that if she could come to him, he would accept her heartily. Unable to control himself, he also wrote a letter to Munni Bai:

“Bai ji, it is pathetic that you have gone away from me; had you been closer, I would have been blessed. I would dance around you like a flame, I would have made you a lamp and hover around like a moth….For God’s sake come now, or give me a date when I may come; I am in great pain…”

The pathetic tale of their love was spread over a very long period of time. During the entire period they had three stints of meeting but Dagh’s love for Munni Bai did not fade out. It was not a case of the proverbial “out of sight out of mind” situation but a unique case of “out of sight but inside the mind” condition. Having advanced in age, she once wrote to Dagh in the nineteenth year of her stranger-than-fiction relationship that she had abandoned things that were prohibited and wanted to get into a nikah and remain under veil as long as she lived. She also wrote a matter-of-fact letter to him which had no trace of love in it. Instead, it read like a conditional message devoid of any emotional connect whatsoever:

“I would not see you unless I enter into a nikah with you. I cannot disobey the sharia. Do not be misled now that I will come to you according to your wishes. If you desire to enter into a marital relationship with me, get me a home and I will be yours only in that home. You would not see my face as long as the Qazi brings us together in nikah.”

Unable to resolve the crisis, a totally shaken Dagh bid farewell to Munni Bai. The story seemed to over but a few years later, an old Munni Bai reached Hyderabad to meet Dagh in January 1902. Dagh was over seventy by then. Munni Bai was in veil and completely given to observing the ways of sharia. She met Dagh in veils. Stunned to the core, Dagh made arrangement for her stay in a different house and paid for all her expenses. He was still enamoured by her and wanted to enter into wedlock. A friend asked him, “what makes you think you are fit for entering into this relationship at this age with your teeth fallen and your hair grown grey”. Dagh replied coolly, “More than a wife, I need a sympathiser at this stage of my life. I think the first wife is a wife, the second wife is a companion, and the third wife a total disaster for life”.

Dagh was ready for a nikah but his daughter, son-in-law, and friends made him see sense. They pleaded with him that she had evil designs in mind and wanted to encroach upon all his possessions after nikah. Dagh started seeing some reason; he went slow and took a while to understand. Munni Bai could not bear any delay; she got angry. Soon they grew bitter with each other. She had come to Hyderabad thinking that she would allure Dagh and find a safe haven for the rest of her life. She failed in squeezing any favours from Dagh but she stayed on to watch if things would turn in her favour. In spite of the wedge that had surfaced in their relationship, Dagh kept on paying for all her expenses. In the meanwhile, she was joined by over a dozen of her associates from Calcutta who had come to stay with her for good. Dagh found it too demanding and thought it was no longer possible for him to pay such a heavy cost for a love that had lost all its sheen and become ruthlessly practical at the end. Hijab was upset at her failure to make a space for herself with Dagh. Both grew distant and started hating each other. Munni Bai was left with no other way; she returned to Calcutta utterly despaired and broken. Their long-drawn story of helpless love spread over two decades reached a pathetic end. In his masnawi, Dagh wrote:

Dagh grew more and more miserable with each passing day. He fell ill in September 1904 never to be cured. He departed in September 1905, leaving behind a treasure house of poetry and an empty coffer of an illusory love story.