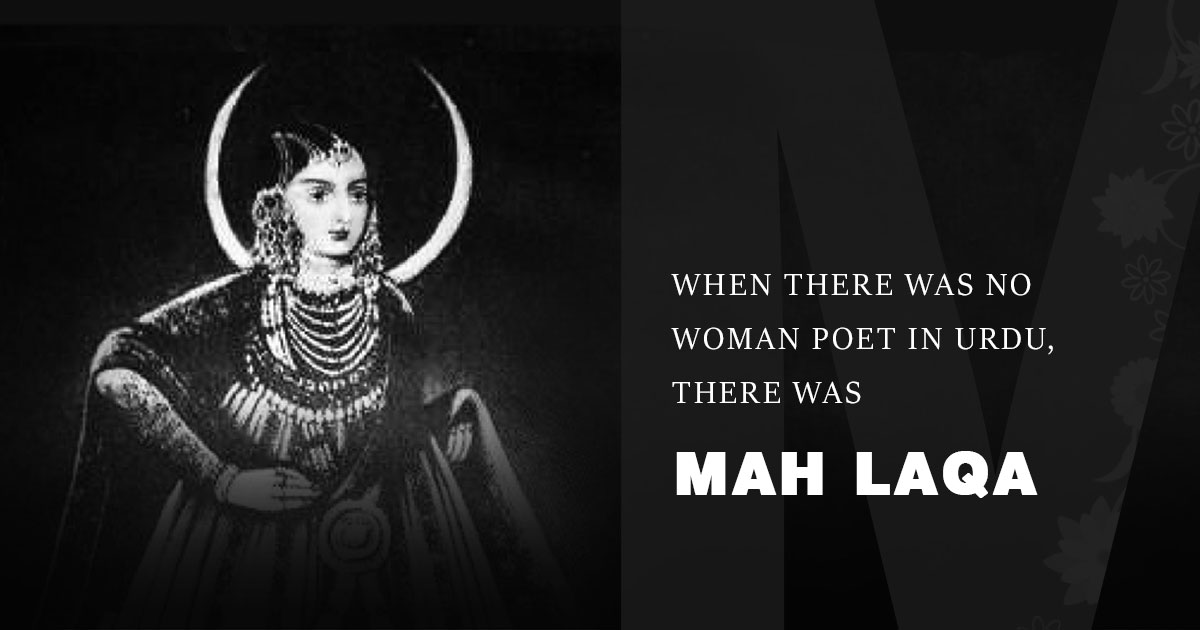 When there was no woman poet in Urdu, there was Mah Laqa

The Importance of Being Mah Laqa Chanda

When there was no woman poet in Urdu, there was Mah Laqa. This indeed is the case. The suffix of “bai” that usually goes with her name identifies her as one who danced, while the other suffix of “chanda” qualifies her as a poet. She chose this nom de plume after her maternal grandmother who was called Chanda Bibi.
At the threshold of the nineteenth century, the Urdu language saw the emergence of the first woman poet with a complete divan to her credit. This was Mah Laqa Chanda born in 1768 in Hyderabad. Stunningly beautiful in appearance and superbly jovial by nature, she chose to remain unmarried, lead a life of comfort and discipline, and move like a warrior on a horseback with an entourage of her bodyguards. Her wit and pleasant manners distinguished her clearly. She was adored as much as a person as she was as a poet. Interestingly enough, she was also aware of her multiple merits which she did not hesitate to express in her verses:

A Woman extraordinary
Maha Laqa was a woman extraordinary. A deeply religious being, a sensitive poet, a fine dancer, a kind patron of art, a rich princess of her own kind, and a benefactor of many, was also a sharp wit. It is said that she had no parallel in narrating anecdotes and cracking jokes. Once she was on her way to a destination close by, a small container of lime fell from her carriage. Someone who watched this said aloud that an egg from Bai’s carriage has fallen down. Mah Laqa got back instantly and quipped in good humour, “How nice, the chick started chirping as soon as it fell down.”

A lineage unusual
Mah Laqa Chanda’s ancestors lived a hard life. During the reign of Mohammad Shah, a treacherous person called Khwaja Mohammad Hussain Khan married Mah Laqa’s maternal grandmother called Chanda Bibi. He fathered nineteen children but only five of them could survive. As he was found indulging in financial misdemeanour at the emperor’s court, he escaped leaving behind Chanda Bibi. Punishment came misdirected when the court ordered that Chanda Bibi and her children be kept under house arrest. As this happened, she suffered disgrace and hunger and chose to escape and seek refuge in a jungle. Realising the futility of her lineage and family honour, she decided to fend for herself and train her children in the art of singing and dancing. Later, a benefactor called Raja Salim Singh provided refuge to them. This was precisely the time when Salim Singh fell in love with Meda Bibi, the youngest daughter of Chanda Bibi. Chanda Bibi accepted this love bond between them. Meda Bibi gave birth to Mehtab Bibi about whom the astrologers predicted that she was destined to be the wife of a vizier. This led Salim Singh’s wife to resort to witchcraft against Meda Bibi. Chanda Bibi could not bear her incessant suffering and she passed away soon after. Later, the events took such a turn that they left Salim Singh’s place and fled away to Deccan. During their escape, the two brothers of Meda Bibi were lost somewhere during the journey. Subsequently, the girls changed their names and chose to become dancers. Meda Bibi changed her name to Raj Kunwar and her daughter’s name to Bibi Mehtab Kunwar. Raj Kunwar Bai earned a name for herself as a dancer. Meda Bibi grew closer to Wasalat Khan Bahadur and they gave birth to a girl child. This was the girl who was named Mah Laqa, meaning the beauteous one like the moon. And this was one who later earned a name for herself as an amazing poet.

A life extraordinary
Mah Laqa Chanda’s mansion was a curious place and was kept under the supervision of Ailchi Beg. It had different areas marked for different purposes. There was a quarter for the training of dancers, an imambaada dedicated to Imam Hussain, and a naqqar khana where drums were beaten on occasions. This place was richly decorated during the days of Muharram and it was ordained that no one would go there in a red dress as this was a place dedicated to reciting marsiyas. Interestingly, this was also the location for holding Khat Darshan fair which had a great socio-cultural relevance during those days. Different days were dedicated for different groups of visitors to this fair. The fakirs and the hafiz of Quran visited the fair on the first day and each one received a sear of sweets. The Qadiriya and Chishtiya Sufis came on the second day and they were served with a good feast. A throng of around seventy thousand poor people appeared on the third day and each visitor was gifted with half a sear of sweets. Finally, the yogis arrived on the fourth day and were treated with the maal puri, a delicacy of sorts. It is said that during all these days Mah Laqa presented herself personally as a kind patron and a truly compassionate woman.
Living an extraordinary life in such a liberal space, Maha Laqa Chanda said her prayers every morning and recited the holy Quran to Babbar Ali, better known as Ladley sahib. She ate little and received her lessons in music and dance every evening. She left behind her possessions worth a crore of rupees which were given to two of her special attendants–Haseen Afza Bai and Haseen Laqa Bai.

A poet of secular subjects
Poets have had a tradition of taking mentors to help them grow as poets. It is said that one Sher Mohammad Khan was her mentor but another one called Meer Alam Bahadur claimed that he indeed was her real mentor. A reading of her ghazals collected in Gulzar-e-Mah Laqa would show that she mastered a distinct tone and tenor and captured different experiences of her in her poetry. Her poetical compositions are replete with the ideas of love, beauty, cultural cohesion, and religious fervour. Some examples should be of interest:

Listen to this mesmerising poetry of Mah Laqa Chanda

Having lived an eventful and distinguished life Maha Laqa died in 1833. She is considered now as an iconic figure in the realms of art and culture. Thousands of her devotees and admirers of her multiple talents congregate at her mausoleum every year. These include fakirs, pirs, and common people, apart from the affluent ones of Hyderabad. 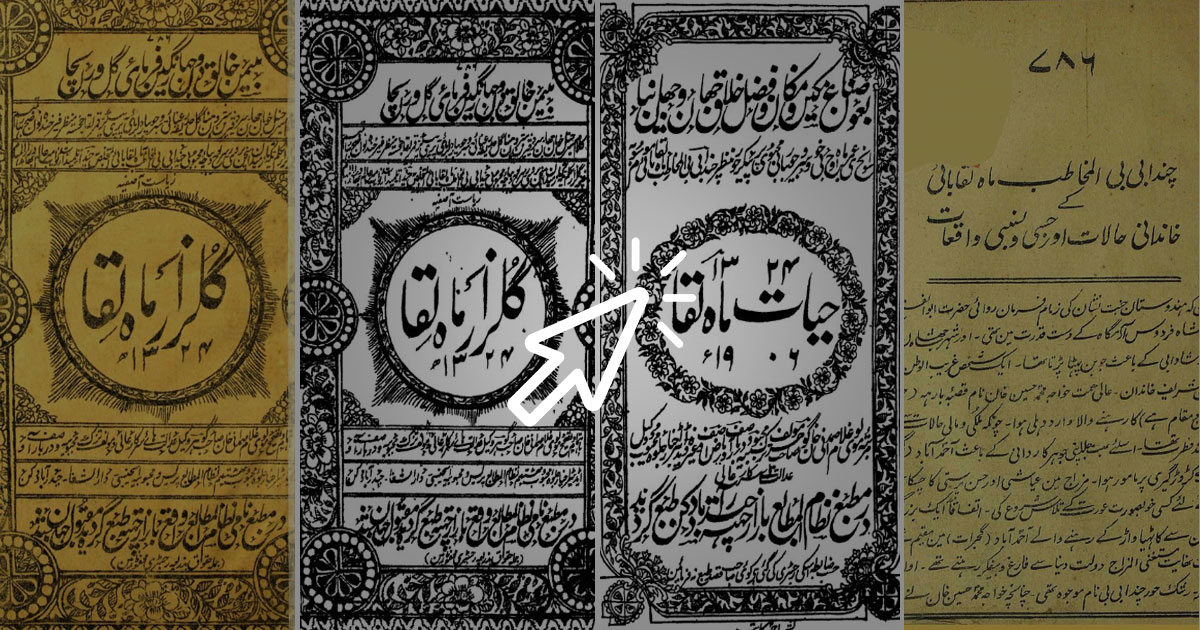 Click on the image to read the poetic works of Mah Laqa Chanda.