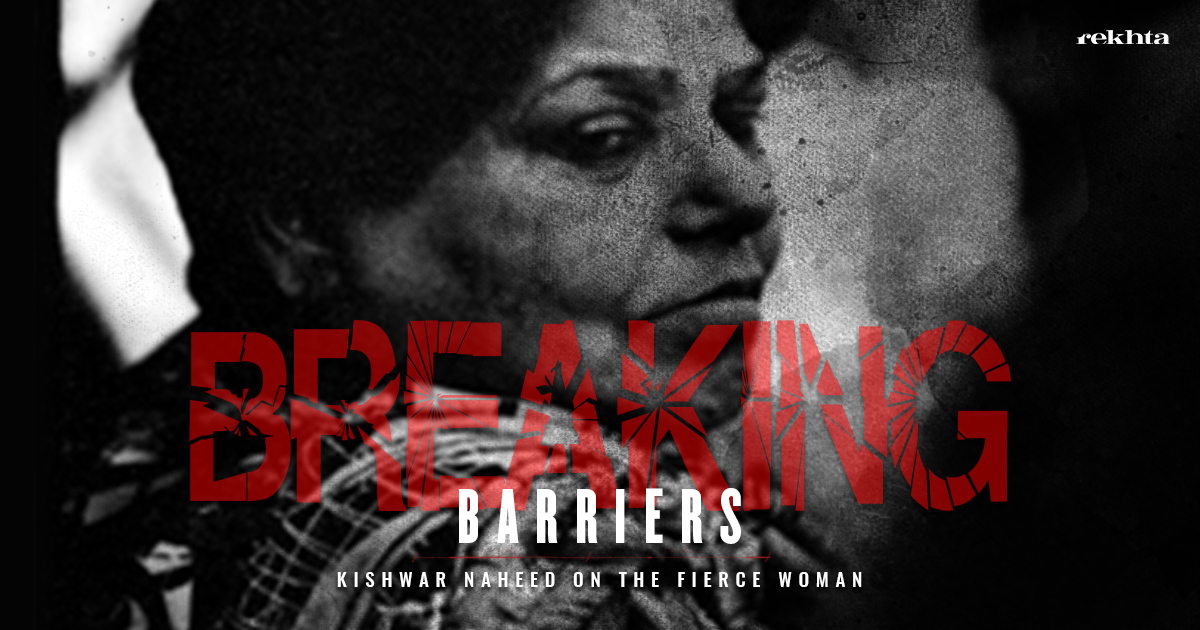 Woman as outcast, woman unvanquished, woman as a force to be reckoned with.

Kishwar Naheed is known to be an outspoken individual and a poet much too confident. She led an unconventional life and defied stereotypical expectations. Her individual lifestyle and her desire for financial independence nurtured her sensibility both as a person and as a poet. Thus, she offers unapologetic models of femininity through her life and work.

With her assertive verses, Naheed snaps us out of our stupor. One does not ease into her poetry with slow and steady adjustment to her ideas. Instead, we confront the fierce woman and her propensity to resist, all at once. Immediately, we recognize that the woman spoken of in her poetry is a force to be reckoned with.

We are made aware of her woman not only in terms of her intellect, but also as a physical entity. Her corporeality is clearly emphasized. Through the course of history, the woman’s body has been the site of political controversy. She is shamed for accessing her own desires. Patriarchal setups attempt to snub that self-sufficiency and seek to trap the woman. Naheed locates that oppression within the bond of marriage.

Naheed espouses stubbornness. She idealizes the determined woman – the very model of femininity that is condemned by society. This woman cannot be captured and contained. She refuses to succumb to oppressive orders. Unwelcome by dominant regimes, she exists on the margins of society. In her verses, Naheed focuses on the madness of such a woman and celebrates it.

The idealized woman from Naheed’s verses is not snubbed easily. Her resilience to adversities is emphasized. Agents of oppression try to break her spirit and tame her. Naheed valorizes the strong woman – the innately wild creature that she is. She persists and thrives, much like wild grass that one tries to level to velvety softness.

Naheed extends the image of woman as wilderness. In an attempt to define herself, she writes a nazm in response to the question of her identity – who is she? She defines herself as the one from whom loveliness has been extracted ruthlessly but she is still unvanquished. The fragrance of flowers that symbolizes her cannot be contained by chains.

Kishwar Naheed does agitate those who read her poetry, alerting them to the coming of a powerful woman. Society wrongfully labels the assertive woman as sinful and Naheed reclaims that very attribute. In this manner, she subverts the oppressor’s order. Her poetry celebrates the woman who asserts herself but ironically enough, society perceives her as wicked. All through her poetry, her construction of femininity stands out – uncontrollable and unapologetic.

Faiz, Friend of My Soul

A relentless humanist, a hopeless romantic, and a heartbroken patriot, Faiz is everything that life can offer. He is no stranger to the festivities and griefs of the human. His oeuvre is the adjudicator of humanity. Faiz, to me, was the last humanist of the twentieth century who embraced everything human.