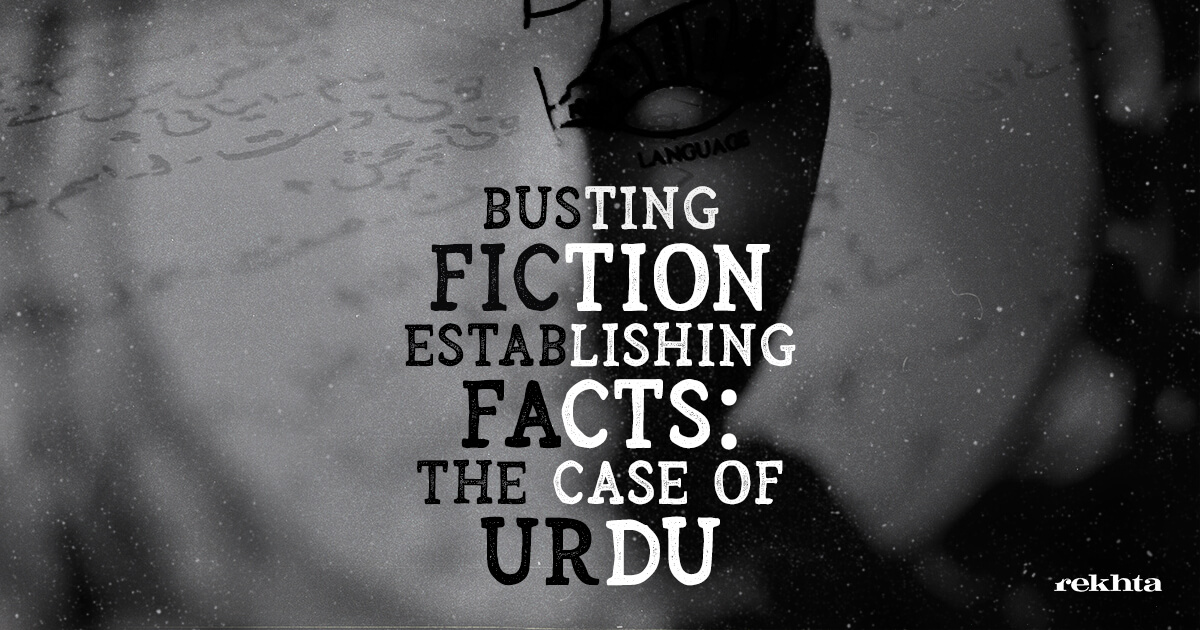 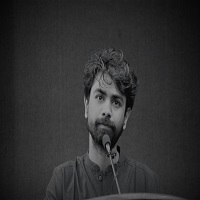 Urdu has suffered immensely because of the preposterous misconceptions that have been spread about it. It has been alleged that Urdu is religion-specific and belongs to a geography other than India. A state university was recently in news for proposing to group Urdu with foreign languages in spite of the firmly established truth that such stigmatization of this language is effectively a shameless mockery of facts. Even a shallow enquiry into it would reveal that the popular myths about Urdu only represent the divisive politics of sectarianism. It doesn’t need any more investigation to assert the Indian-ness of Urdu, if that be the concern. Urgent, in fact, is to untie the stiff knots of falsity around the history and social identity of Urdu.

There is a popularly held notion that it was the language of Muslim invaders/emperors which is far from the truth. Suffice here is to quote Muhammad Hussain Azad whose canonical book ‘Aab-e-Hayaat’ presents rough details of its origins– ‘The body of Urdu was made from the clay of Sanskrit and Braj Bhasha. Words from all the other languages acted only as a beauty spot’ (as translated by F.W. Pritchett). Not only Azad but several discourses around this idea carry this thesis forward.

This would be of interest to note that Sanskrit had almost died as the high literary language and had been replaced by Prakrit towards the very beginning of the 5th century BC. Grammatical rules had already been laid out which eventually elevated the status of Prakrit from the language of the common populace to the language of literature. Like Sanskrit, Prakrit also gave rise to newer forms of colloquial language in its own turn. These languages are called apbhramsa (which means ‘non-grammatical language’). Significantly, ‘apbhramsa’ prospered for the next fifteen hundred years. As the first millennium AD reached its end, the modern Indo-Aryan languages began to emerge; Urdu being one of them.

Local dialects spread over the modern-day Haryana, Punjab, Rajasthan, Madhya Pradesh, Uttar Pradesh, Bihar, Maharashtra and Delhi together contributed to make Urdu a full-fledged language with its own grammar. The languages spoken in Northern India in the eleventh and twelfth centuries were not very different from what was to evolve in Delhi and its suburbs later and travel further to southern India. Khari Boli, Mevaati, Braj Bhasha and Haryanvi were the dialects prevalent in these parts. In fact, the samples of Khari Boli from 1000 AD to 1193 AD have been recognized as ‘Ancient Urdu’. In the earliest samples of Khari Boli nouns, pronouns, adjectives and verbs generally end at the long vowel sound ‘aa’ represented by alif, the first letter in the Urdu alphabet. Urdu is unanimously agreed to have originated properly by the turn of the 12th c. AD when Muslims made Delhi their permanent abode. It is possibly this historical coincidence that has been abused to stigmatize Urdu.

Delhi regained its political prominence with this migration from Punjab to Delhi. Although the migrants also included the speakers of Persian, Arabic and Turkish, most of them were the ones who had been living in Punjab for quarter to two centuries. Delhi thus became the site of the confluence of these languages and dialects and Persian and Arabic elements got incorporated into Khari Boli giving rise to a new form of language which came to be known chronologically as Hindvi, Hindi, Rekhta and Urdu. The same language travelled to the Deccan with Alauddin Khilji’s army in 1294 AD and prospered independently till the death of Aurangzeb in 1707 AD.

Following the Muslim conquests of Delhi, Persian became the literary and official language of the time and continued to enjoy that status until Urdu toppled it from its throne. It is hard to find considerable literary evidences of Urdu after the demise of Amir Khusro, in 1325 AD, who himself claimed to be a poet of Hindvi. The reason lies in the fact that Urdu was the language of the common people while Persian enjoyed a higher status. Urdu’s earliest verbal and textual validations are found in the sayings and works of the prominent names of Sufi-Bhakti tradition. Along with Sufi saints like Sheikh Fariduddin Ganj Shakar, Sheikh Abdul Qudoos etc., Namdev, Kabir Das and Guru Nanak are amongst the grand literary and social figures that played a crucial role in spreading and popularizing Urdu.

The Bhakti saint Namdev was a Marathi poet but he also wrote in Khari Boli to reach a wider audience. Elements of Braj Bhasha are also traceable in his works. Kabir Das, undoubtedly one of the most celebrated literary and social figures in India, was amongst the torchbearers of the Bhakti Movement. In his poetry is found a kind of mixture of languages which includes Khari Boli, Rajasthani and Punjabi. Kabir has also made an extensive use of Persian and Arabic lexicon. Guru Nanak has likewise used Perso-Arabic diction in his Punjabi poetry. Other idioms and sayings offering the evidences of Urdu are found in several Persian books like Taareekh-e-Feeroz Shaahi, Tuzk-e-Jahaangiri etc. All of these references have been made to the colloquial language used in the marketplace and homes alike and arising out of ordinary day-to-day interaction.

The word ‘Urdu’ is Turkish in origin and means a ‘camp’. Excepting few usages, all the histories on medieval India written in Persian use the word ‘Urdu’ to mean ‘city’. ‘Urdu-i-Mualla’ and ‘Urdu-i-Badshahi’ are also used sometimes to mean language of the ‘exalted city’. During the reign of Shah Jahan, ‘Urdu-i-Mualla’ referred to the language spoken in Shahjahanabad (another name for Delhi). Contrary to the general misconception, the military reference to the language as such does not exist even though it must have been used by the soldiers as well. For about five hundred centuries of its existence, the word Urdu was never used to mean the language it came to describe later. It was towards the end of the eighteenth century only that this language came to be known as Urdu for good. The British used to call it Hindustani. This name was so popular amongst the British that both Muslim and Hindu scholars themselves used the same term to refer to their shared literary heritage. The proponents of Hindu-Muslim unity strongly believed in and professed the oneness of Hindi-Urdu despite the difference in scripts. ‘Nastaliq’ (the script in which Urdu is written) had already accommodated letters to represent the sounds not found either in Arabic or Persian diction.

A language reform movement started in the eighteenth century to develop a definite linguistic marker for the cultural elite. Although initiated as a class movement, it turned into a religious one and Urdu was imbued with distinctive Perso-Arabic markers to create a linguistic identity for the Muslims of India. Hindi was likewise reformed beginning in the 19th century by getting rid of the Perso-Arabic vocabulary and incorporating more and more words from Sanskrit. These new languages- Persianized Urdu and Sanskritized Hindi- later started to serve the distinct religious identities thus created.

This ‘treatment’ of the language that evolved as the colloquial medium is ironical to the core as Persian and Sanskrit themselves have striking verbal and syntactical similarities pointing to common ancestral tribes. Azad refers to their incipient forms as ‘Iranian sister’ and ‘Indian sister’ respectively. Linguists and anthropologists have established that there is little grammatical difference between the languages of the ‘Avesta’ and the ‘Vedas’. However, both of them underwent a systematic phonetic change over the course of centuries. In his book The Sanskrit Language, Thomas Burrow writes, ‘It is quite possible to find verses in the oldest portion of the Avesta, which simply by phonetic substitutions according to established laws can be turned into intelligible Sanskrit’.

Despite the recurring proposition that a language in its very essence belongs to a geography and not to religion, both Urdu and Hindi have suffered due to the attempts that have sought for them religious affiliations. Urdu, in particular, stands engulfed in nonsensical misbeliefs that have been harmful to it and continue to be so. Some have even begun to believe that Urdu is the language of the religious book of Muslims. It is essential to eradicate these misconceptions so that its literary heritage is valued like it deserves and its functional continuity is not obstructed.

Faiz, Friend of My Soul

A relentless humanist, a hopeless romantic, and a heartbroken patriot, Faiz is everything that life can offer. He is no stranger to the festivities and griefs of the human. His oeuvre is the adjudicator of humanity. Faiz, to me, was the last humanist of the twentieth century who embraced everything human.