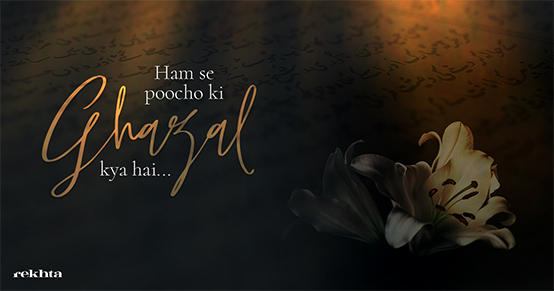 A brief appreciation of Ghazal and its characteristics

Urdu Ghazal is one of the most prominent forms of Urdu poetry that have survived the passage of time. The likes of Mir, Ghalib, Firaq and Faiz have taken this genre to the zenith of popularity and appeal. Despite almost eight hundred years of its existence, ghazal hasn’t lost its sheen. Instead, it still resonates in the hearts of poetry enthusiasts with the same fervour.

Ghazal can be defined as a set of couplets in which every couplet is a complete poem in itself. It usually has a minimum of five couplets; there is however no maximum limit. These couplets end with the same rhyming pattern and are in the same meter.

The word ‘Ghazal’ has its origin in Arabic and means ‘to talk to the beloved.’ One more etymological derivation suggests the meaning of the word ‘Ghazal’ as ‘the wail of a wounded deer’. These meanings themselves have remained a constant refrain in Urdu Ghazal poetry. As we go tracing back its origin, we find that it is a 7th century Arabic poetry genre where it evolved out of the nasib: the introductory section of another poetic form, the qasida. It reached South Asia in the 12th century under the influence of the new Islamic Sultanate courts and Sufi mystics. It is now the most popular form of Urdu poetry across the world.

Traditionally, Ghazal was understood as the poetic expression of love, pain of loss and separation. It dealt with the subject of unrequited love encompassing the beloved who does not reciprocate and the lover who desires. Ghazal has been influenced hugely by Sufism. Some of the major traditional poets were either avowed Sufis (Rumi and Hafiz) or sympathizers of the idea. Therefore, the ‘beloved’ in ghazal poetry can also be seen as an unattainable higher being. However, ghazal has undergone several changes over the period of time and now it consists of a wide range of topics. Contemporary Ghazal writers are looking forward to breaking the traditional barriers with regards to its themes and subjects and thus the Modern Ghazal incorporates all sorts of ideas, issues and questions.

Defining features and details of the form:

A Ghazal must follow rhyme and refrain rule, and its rhyming pattern can be identified as AA, BA, CA,.. and so on. Each couplet of a Ghazal ends at the same phrase/word (the Radeef), which is preceded by rhyming word (the Qaafiya, which appears twice in the first couplet). In order to understand such technicalities, let us consider the following Ghazal by Mirza Ghalib:

Sher: Each couplet of a ghazal is known as a Sher. All of the shers in a ghazal follow the same rhythmic pattern.

Misra: Each of the two lines of a couplet is known as Misra. The first line is called ‘misra-e-oola’ while the second line is known as ‘misra-e-saani’. Each misra of a ghazal has to be in the same meter.

In the example above we can see that the ‘oolaa misra’ (of any sher except that of a matla) follows only the metric requirements, whereas the ‘saani misra’ has to fulfil radeef and qaafiya requirements as well.

Qaafiya: Qaafiyaa is the rhyming pattern that precedes ‘Radeef’ (Refrain).

Radeef: Second line of each couplet of a ghazal mostly end with the same word(s)/phrase. This recurring word(s)/phrase is known as ‘Radeef’. The refrain ‘kya hai’ in both lines of the matla and the saani misras of all successive shers is the Radeef of this ghazal. Some ghazals do not have a ‘Radeef’. Such ghazals are called ‘Ghair-muraddaf ghazals’.

Matla: The first couplet of a ghazal is known as ‘matla’. The defining feature of the ‘matla’ is that both the lines/misra’s of matla will have the same rhyme and refrain.

As seen in the above example, first couplet has both the misras equipped with radeef (kya hai) as well as qaafiya (hua and dawa) which is a necessary characteristic of a matla. There can be more than one ‘Matla’ in a ghazal. In such a case the second one is called ‘Matla-e-saani’ or ‘Husn-e-matla’.

Bahr: Metrical pattern followed by each line of a Ghazal remains same, and this pattern is known as ‘Bahr’. There exists a large number of Bahrs, but 19 of them are most prevalent. Some of them are Bahr-e-rajaz, Bahr-e-ramal etc.

Musalsal Ghazal: Each couplet in a Ghazal is independent of any other couplet. However, there do exist ghazals having a singular theme such that its couplets are interconnected with one another. Such a ghazal is called a ‘Musalsal Ghazal’. One of the famous Ghazals by Hasrat Mohani ‘Chupke Chupke raat din aansu bahanaa yaad hai’ is a musalsal Ghazal having a continuity in its couplets.

Takhallus: The pen name adopted by Urdu poets is known as their ‘Takhallus’.

In the given example, ‘Ghalib’ is the ‘takhallus’ of the poet and it is used in the last couplet of the ghazal. (The real name of ‘Ghalib’ was Mirza Asadullah Khan. He wrote under the pen-names ‘Ghalib’ and ‘Asad’.)

In the given example, the poet uses his pen name ‘Ghalib’ in the last couplet and therefore it is ‘Maqta’. However, the use of pen name has been decreasing over the period of time and these days we find many Ghazals without ‘Maqta’ and ‘Takhallus’.