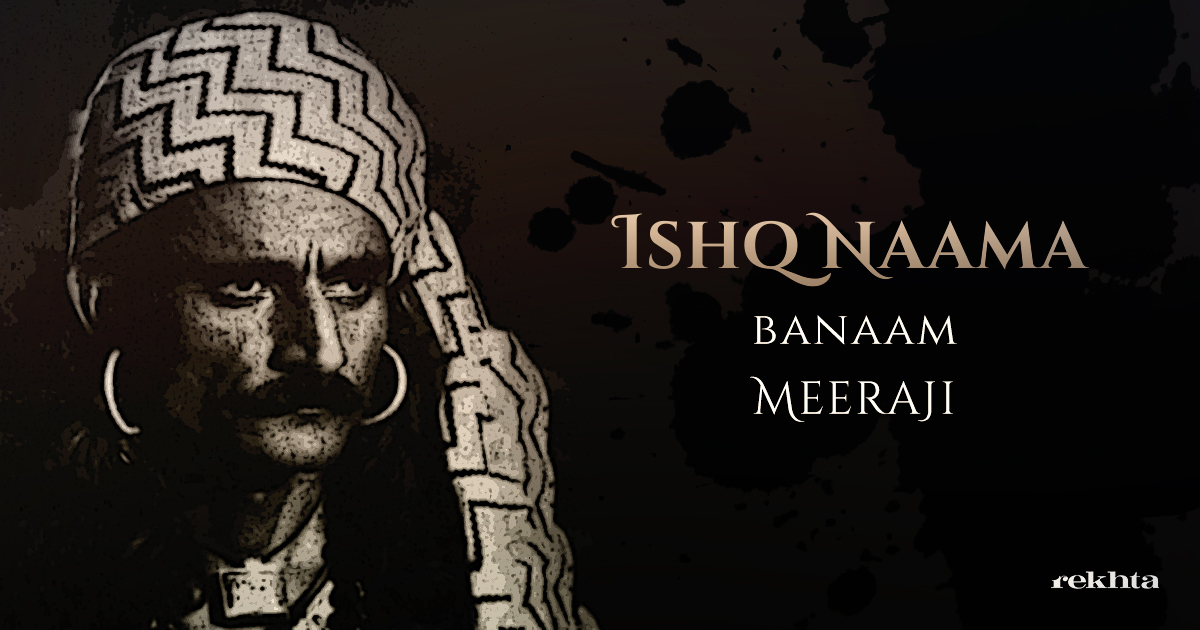 Who is Meeraji? Alive, or dead? Poet, or lover? Iconoclast, or imposter? To answer: he is one and all of them—a curious being of many appearances. He sought meaning in silence and love in loneliness and met both of them in mystical and mundane manners. In disregarding the stereotypical norms of living, loving, and writing, he became a symbol of the absurdities of life, sufferings of love, and intricacies of poetry.

A major modernist poet, by all means, Meeraji is also a myth of sorts. He had to be so, for he lived a life completely atypical and totally abysmal. What do you think of a man who looks morose, talks less, doesn’t smile, and hardly ever laughs? And how do you reconcile with one who chooses to go with unkempt locks, wear a headgear, and sport long moustache? Furthermore, what do you make out of one who appears before you with a rosary of beads around his neck, rings in his ear lobes, and two balls in his hands? Was he a yogi who had lost his way?

In spite of all he did and the way he lived, Meeraji remained a fascinating person. His aberrations characterised him. He made abnormal choices: kept his teeth unwashed and his nails dirty, remained at ease without a bath and drank incessantly. He also broke into tears at times, especially after drinks. He wore three pants and an overcoat in summer, carried himself in a sherwani with its pockets filled with umpteen things—a pipe, some crude tobacco, a small betel box, smudged pieces of paper, a queer collection of homoeopathic medicines, and what not.

Meeraji lived his life like a character in a fantasy but was crudely shocked by its stark realities. One morning, he woke up with bruises on his face. When asked who had done that to him, he said he did not know but he wanted to meet the person who had caused him this pain. One wonders who that person could be to bring such a hurt to a man like Meeraji who had done no wrong to anyone. There is a lingering doubt that this was none else but he himself who indulged into this act in a moment of rage against his own self. Some called him crazy, others thought he was a put on, still others believed he was an innocent being in spite of all the worldly blemishes that degrade a man.

What made Meeraji turn into such a person? Was this his natural disposition, was he a complex combination of eccentricities, or was it the love bug that had bit him to disaster? It is only too well known that he fell in love with a young Bengali girl called Meera Sen. Some say that while he was sitting in the hockey ground of Panjab University with his friends, he saw her passing by and got instantly fascinated by her movement and her ravishing beauty. He found himself smashed and remained so all his life:

Another account has it that Meera Sen studied in F. C. College and Meeraji lived in a house whose wall joined the college wall. He dug a small hole in the wall and tried to follow her movement with his peering eyes. His friends got naughty with him and teased him playfully that he had gone berserk after her. He was irritated in the beginning but later felt like believing what they said about him. Meeraji had become the image of his pent-up feelings, his torn intricate subconscious:

In yet another story, Meeraji is said to be following her from home to college and college to home. Keeping some distance, he shadowed her every day but never spoke to her. Only once he could gather courage with great difficulty and approached her with his shaken words, “I want to say something to you…” She stopped but Meeraji could not speak another word:

Meeraji cared little if his love was platonic, or if he was simply given to lust; he only knew that Meera Sen had turned into a phantom for him, a dream lost in the haze of despair. This is when he started growing wild and donning a new garb. His manners changed and he acquired a new incarnation as a wanderer lost in time and place.

Meeraji was not Meeraji by birth; he was born Sanaullah Sani Dar but assumed this name to be one with Meera Sen. By becoming Meeraji, he joined her in spirit, if not in body. He thought he had changed a fantasy into reality, as he was doing in his poetry. In an act of subterfuge; he even started reading the poetry of Meera Bai. May be he was discovering his Meera Sen in a different incarnation.

Was Meeraji a wayward romanticist or a rebellious spiritualist, we do not really know. But he was surely an iconoclast of the first order–both as a poet and a lover.