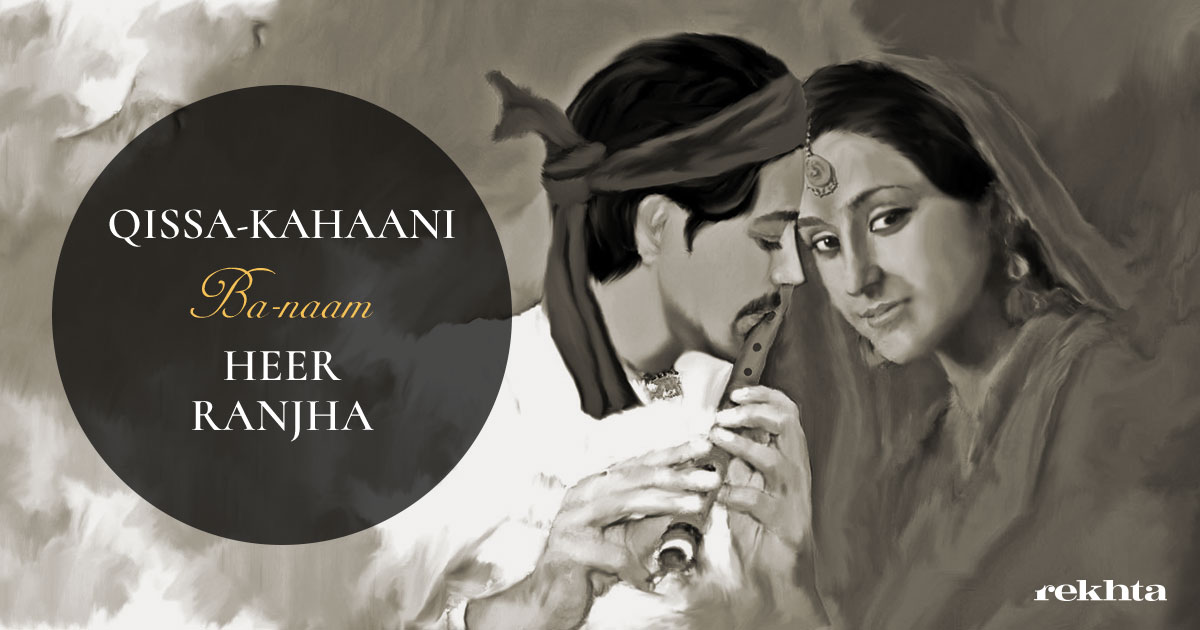 In life we part; in death we meet: The story of Heer and Ranjha,love in life.love is life,

Some stories never die; they are told again and again, from time to time, place to place, author to author. One such is the story of Heer and Ranjha. About six centuries old now, it was first narrated in verse by one Damodar Arora during the reign of Emperor Akbar. Damodar was a native of Jhang where the story is broadly based and he had heard it from one Raja Ram Khatri who is supposed to be an eyewitness to all that happened. Since then it has been narrated variously and in various languages, both in verse and prose. One of the most notable narratives came from Waris Shah in 1766, apart from several others in Sindhi, Haryanavi, Hindi, Urdu, Persian, and English. In Persian alone, there are as many as twenty versions of this story and in Urdu not less than fifteen.

Ranjha was the son of a landlord and lived in Takht Hazara by the river Chenab. Heer was the daughter of another prosperous person from Jhang. Both were young, both were beautiful and both were destined to fall in passionate love and suffer, as suffering has ever been the destiny of genuine lovers.

The young Ranjha did not have much of the worldly skills but he was a good shepherd and a fine flute player. After the death of his father, he was considered a burden on the family. His brothers ill-treated him and denied him proper share in ancestral land. In anger, he walked out of his home.

While at home, Ranjha had a dream and in his dream he had the vision of an exceptionally beautiful girl. He was enamoured by her and wished to meet her. So, when he left his home, he decided to move towards Multan to seek solace from the famous five pirs and find the whereabouts of his dream girl from them. Wandering from place to place, he happened to reach a mosque where he thought of spending the night. To assuage himself, he played his flute there but the imam of the mosque objected to this saying that music was not allowed in Islam. When he offered his logic that music knew no religion and could assuage a suffering soul, the imam saw sense and allowed him to spend the night there.

Following this, Ranjha kept wandering from place to place in Jhang like a love-lorn being. It was during his wanderings that he happened to meet the five pirs who told him about Heer’s whereabouts. As he moved on in search of his destination, he came to a lush green field of crops. It was owned by one Chochak Khan who happened to be the chief of the Siyal tribe. He liked the young Ranjha and thought of employing him as one who could take care of his cattle and also play his flute to keep everyone happy. He took him to his home and to his utter surprise it was here that he met Heer. As love stories have it, they instantly recognised each other as their complimentary beings and fell in love instantly. Being together day and night, they grew closer and closer –day after day.

When Heer’s parents got to know of their intimacy, they imposed severe restrictions on her but Heer defied the bondage and started meeting Ranjha during the nights. Heer’s uncle, Kaido, spotted them meeting in privacy one night and objected fiercely. This made the parents still more oppressive and they put Heer in solitary confinement. With this, began the immeasurable suffering of Ranjha once again.

Since Heer’s father could by no means think of giving her daughter’s hand to a shepherd with hardly any means, he thought of finding a suitable match for her. He ultimately found a young and affluent man called Saida Khera from Rangpura. Heer did not agree to enter into this marital bond and argued with the qazi at the time of her nikah. But the nikah had to be solemnised and it was performed under duress brining much pain to Heer. She was sent to her new home with her husband and all the wedding gifts including a herd of buffaloes. The buffaloes had become so friendly with Ranjha that they did not budge without him. With no choice left, Ranjha had to be sent with the buffaloes to look after them. Even after being put in a marital bond, angry Heer did not show any concern for her husband and kept meeting Ranjha secretly. When the word spread and people started gossiping, Ranjha was sent out of Rangpura. With this, Heer’s suffering grew many folds. She started shedding tears and suffering in separation.

Ranjha again started wandering in forlorn places. One day, he met some yogis in the jungle and chose to become one like them. One day, he entered Saida’s village in the guise of a yogi with ears pierced and rings hanging byhis earlobes. Heer could easily sense who this yogi was. She sought help from Said’a sister who had been sympathetic to both Heer and Ranajha. With her help, she found an opportune moment to flee from Rangupra with Ranjha. Both were, however, caught on the way. The matter was brought before a qazi who directed that Heer be brought back and reunited with her husband, Saida. This made both Heer and Ranjha curse him which led to a disastrous fire. Now, the matter reached the town’s headman who gave his verdict in favour of Ranjha. After this, as per Damodar, both Heer and Ranjha left for an unknown destination.

Some other narrators of this story like Aaram and Waris Shah carry this account further. According to Aaram, both Heer and Ranjha were brought to Heer’s home after the verdict of the town’s headman where her parents agreed to put them in wedlock. This was, however, only a deception. On the day of their wedding, Heer’s uncle, Kaido, put poison in Heer’s sweets which would lead to her death than to her wedding. Kaido succeeded in his nefarious plan and Heer died as soon as she tasted the sweet. A heartbroken Ranjha was also made to taste the same sweet and to meet the same end.

According to another narrative, after the town’s headman gave his verdict in favour of Ranjha, he was sent to Hazara to make preparations for his wedding and come to Heer’s home as a bride. While preparing for his wedding, he came to know of Heer’s poisoning. A devastated Ranjha rushed to Jhang but only to see her dead. Unable to bear this immensely tragic moment, Ranjha took no time to taste the same sweet that Heer had been deceptively made to taste. A true and genuine lover that Ranjha was, he fell by her side and breathed his last to meet Heer in death.

Heer and Ranjha could not really unite with each other in life but they actually did in death. They lie buried in Jhang, Heer’s hometown. They are visited by lovers and admirers of love in life and life and love.