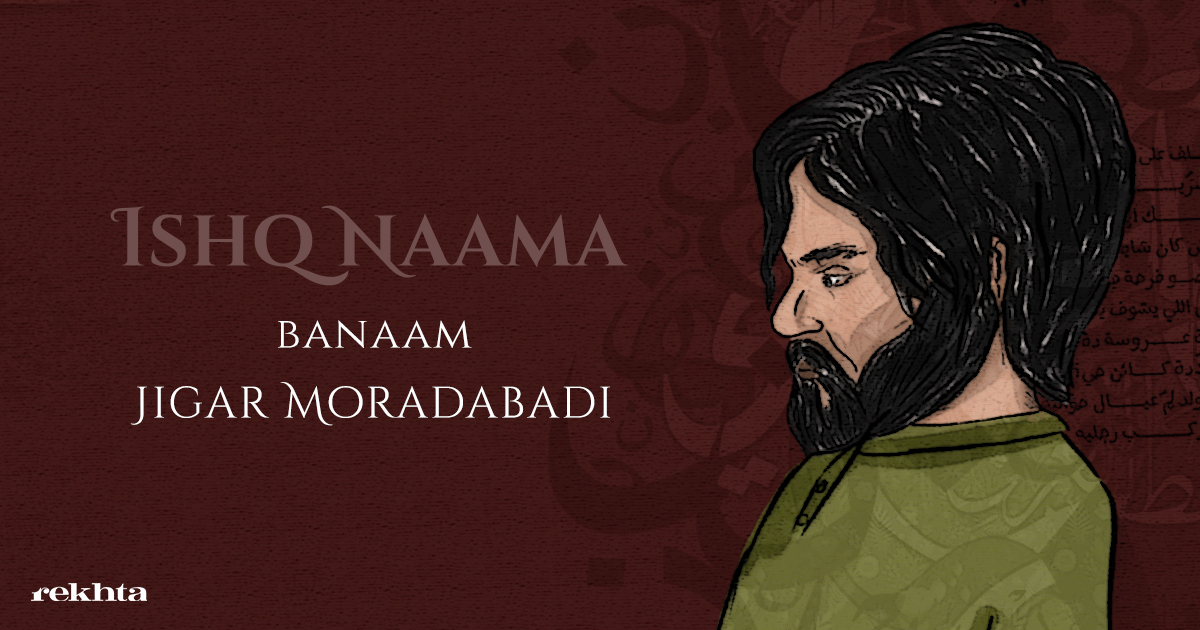 Jigar Moradabadi lived two lives of love and longing. In one, he was liked, loved, and then helplessly separated from his beloved; in another, he was accepted, rejected, and finally reunited with one who happened to be his wife once. One is a stormy narrative of his love with Raushan; another a saga of his bizarre bond with Naseema.

Raushan was a beauteous being par excellence. She came from an enlightened family and was the daughter of a senior government officer from Agra. She was enamoured by the poet Jigar who had made a name for himself and had cast his spell far and wide. As poets are hardly ever expected to be good grooms, Raushan’s parents found it hard to give their daughter’s hand to him. In a state of exasperation, both Raushan and Jigar decided to flee from Agra. Considering the times in which they lived, this was like taking a huge risk at the cost of familial reputation. As they were set to leave, they thought that only a poet could come to their rescue in this delicate hour. Riaz Khairabadi, another poet of great repute, was their natural choice. When Jigar and Raushan arrived at his place, they were treated respectfully but soon Khiarabadi could sense that there was something scandalous about them. He also came to know that this matter had already reached the police. Fearing that they could be in trouble, he persuaded them to return but they did not like the idea.

They had to find another refuge and this time they moved to Moradabad where they met a benefactor in one S. M. Aqil. Aqil accepted them as his guest. Both Jigar and Raushan felt that they had found an angelic being in him without realising that this person had some ulterior motive and was going to betray them shortly. In fact, Aqil had got enamoured by Raushan and craved for her companionship. When he realised that he would not succeed, he wrote a letter to Raushan’s father saying that his daughter was with him and that he should come and get her back home to avoid the matter taking an ugly turn.

A few days later, Raushan’s elder brother arrived from Agra. As Aqil had pre-planned, he called the police and handed over Jigar to them. He also took the credit of bringing a kidnapper to book against whom a warrant had already been issued from Agra. Aqil kept Raushan’s elder brother for a few days as his guest but shocked him with the news that his sister was going to be a mother in a few months. Like a good samaritan, he offered to marry her and save her family’s honour. The helpless brother took him on his words and accepted his proposal. Leaving Raushan behind as Aqil’s wife, he left for Agra.

After completing his term in prison, when Jigar returned, he was shocked to learn that Raushan had been taken away from him in a surreptitious manner. He was totally broke now and grew furious, to say the least. He went berserk, treated himself cruelly, and banged his head against the wall. Although Aqil had succeeded in separating him from Raushan, he had miserably failed in winning her over. Seeing Jigar in such a state, a sympathetic zamindaar took pity and brought him back to his place. He soothed him in all possible ways and brought him to a nautch girl who had earned a name for herself as a musician and singer. She gave Jigar her sweet company and also taught him how to render his ghazals in a mushaira. The credit for turning Jigar into the finest mushaira poet of his time goes to her.

Raushan’s story took a strange turn subsequently. One day, she spoke sympathetically with Aqil. This was a pleasant surprise for him. In a tone of reconciliation she said, “Whatever had to happen; has happened; there’s no going back now. Now let me go to the shrine of Khwaja Moinuddin Chsihti where I shall seek my peace”. Aqil argued much against this proposal but Raushan had decided not be swayed away by his argument any more. Finally, Aqil allowed her to leave for Ajmer but only on the condition that her going to Ajmer would be kept a secret from Jigar. A quiet lady by now, Raushan left for her new destination. Sometime later, it was learnt that she had breathed her last there.

Jigar was in a shattered state after his separation from that nautch girl. This is when he is said to have met a major fellow poet, Asghar Gondavia. Gondavi sympathised with him and soon became his friend. He persuaded him to stop drinking and develop a saner view of life. In order to rescue him from his suffering and give a direction to his life, he put him into a marital bond with his wife’s sister, Naseema. Brought into a marital relationship with this highly courteous and responsible lady, Jigar felt blessed but he could not keep away from drinking. Both Gondavi and Naseema tried their best but they could not bring a diehard drinker to become a teetotaler.

When Gondavi realised that his effort to keep Jigar in check had miserably failed, he thought of a new design to reform him. He made him believe that Naseema was not fit for him as they were living in a terrible relationship. He made him divorce her. To meet his plan, he first divorced his own wife and then entered into a marital relationship with Naseema. Jigar was extremely pained at this but he could do little as Gondavi had been his benefactor all through. In spite of the jolt he had received, he did not relinquish his habit of drinking. Gondavi remained deeply concerned as there was no sign of betterment in Jigar’s habit. An ageing Gondavi then made it into an unwritten treaty that when Jigar stops drinking, he should be married to Naseema. This shook Jigar thoroughly. An ashamed Jigar was overwhelmed by Gondavis’ gesture and stopped drinking. When the appropriate time came, his second nikah with Naseema was solemnised. It is also said that Gondavi had not entered into nikah with Naseema but had only separated her from Jigar to help him see sense. It is corroborated by the fact that Gondavi’s wife stayed with him all through. With his noble acts, Gondavi brought equilibrium in Jigar’s life. Jigar was now a different being—completely reconciled and given to the spiritual ways of life. Incidentally, this was also the hallmark of Gondavi’s poetry.