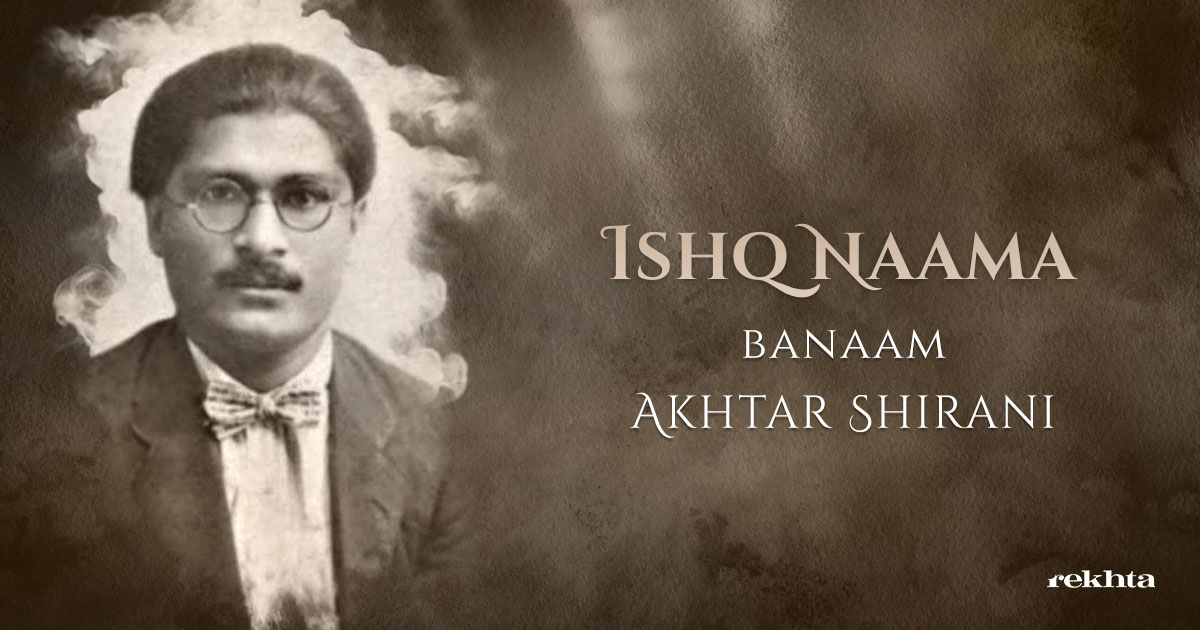 Ishqnaama: The love-life of Akhtar Shirani

One who wrote poems like Sarzameen-e Ishq, Ai Ishq Kaheen Le Chal, Ai Ishq Hamein Barbaad Na Kar, Badnaam Ho Raha Hoon, Jahaan Rehana Rehti Thi, Chand Lamhe Azra Ke Saath, Shikwa-i- Judaai, Aiteraaf-e Mohabbat and many more of the kind must be in the dock of lovers. Whether Akhtar Shirani had really gone wild in love, as some of his critics have made us believe, is indeed debatable.

The debate is strengthened because the poet has mentioned names rather than kept his women under the veil. The way Shirani represents Salma, Azra, Rehana and several others in his poems, they appear to be real. We do not know for sure if Shirani was only playing with his imagination, or was artfully expressing his desire for love and union in an uninhibited manner. Even if he did what he did, does it really hold against him, one might justifiably ask.

Shirani has been painted as a poet who lived his life too liberally, drank incessantly, and cared little for a regulated kind of life. This made him a bohemian of sorts. His manners angered his family, especially his father. Even his friends, who sustained him through all the thick and thin, found it difficult to fend for him on many occasions.

In his book called Salma Se Dil Laga Kar (1980), Shirani’s bosom friend Akhtar Wasti presents the possible-impossible story of Shirani who lived and died pining for a beautiful young lady called Salma. He tells us that Salma had seen a picture of Shirani and fallen in love with him. She wrote him a letter which sent Shirani dreaming. As the plot thickened and he grew crazier by the day, he traced her address in the tradition of a questing lover. They started dreaming of each other and exchanging letters. Soon, the two obsessive lovers found themselves on the verge of breaking barriers, as lovers in traditional societies often do.

On being face-to-face with her for the first time, Shirani felt captivated. It was love in the classic style which begins with a letter, then leads to exchange of photographs, followed by the meeting of lovers, and finally their inevitable parting. As expected, the moments of pain and pining, sighs and tears, and incessant suffering followed, just as it happens in romantic tales.

When this emotional drama reached a high pitch, Wasti tells us, Salma too, like Shirani, was maligned at home. She considered life to be a burden. She fell ill and thought of committing suicide. To save her from emotional deluge, her family chose to get her into a marital bond. Shirani managed to meet her somehow; he advised her to abstain from thoughts of suicide. As planned by the family, Salma was married and it devastated Shirani. He too thought of committing suicide although he had to respect his own marital bond.

Wasti tells us that after his separation from Salma, he engaged with Azra for some time but she too was destined to be married elsewhere. Successive failures in love became Shirani’s destiny. We are told that he then reached out to several others but one wonders if his engagement with so many women could be real even though Wasti makes us believe so. If Shirani’s love for Salma was a real one, all who figured after Salma, one may surmise, were his ways of finding her image in each one of them.

Shirani was totally broke by this time. The members of his family had become hostile, friends had deserted, he had lost his child, and felt sad about being of no use to his wife and children. A few days before his death, he had stopped drinking. He had become insomniac and remained agitated and impatient. After a brief hospitalisation, he passed away on September 09, 1948. His mother and wife rushed to see him in Lahore for the last time where he had gone from his hometown called Tonk in Rajasthan.
Wasti tells us that when Shirani’s funeral procession was moving towards the graveyard, a veiled lady appeared. This was none else but Salma. She asked the procession to stop. It stopped. She came closer to the coffin, unveiled her face and also Shirani’s face covered by shroud. She stared at his face for a long while and communicated with him in solemn silence. Those in the procession stood aghast. After burial, she reached his grave and stood there calm and quiet—with no words to share anymore.

Much in the story of Shirani sounds improbable. It reads like a fine blend of imagination and reality. The way his story comes to us, makes him a curious character who sought a niche for himself in reality as much as he sought in imagination.