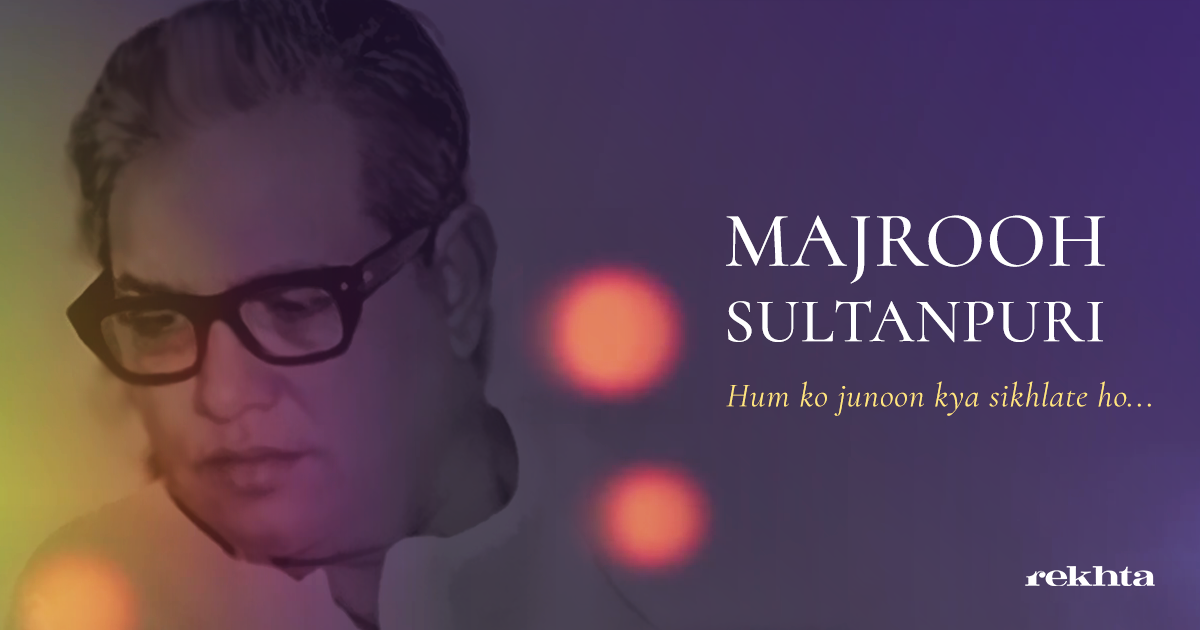 Can one be a romanticist and a classicist at one and the same time? The answer would be in negative. But a few have disproved it. Majrooh Sultanpuri was one such poet who drew upon both and blended them together with distinction. He was a classicist in style and a romanticist in disposition. In addition, he was a humanist — a humanist at core. This is reason enough for Majrooh to remain a lasting reference in the annals of Urdu poetry and its much revered poetic culture.

Schooled in traditional Urdu ghazal, Majrooh enjoyed the patronage of Jigar Moradabadi. Jigar took him to then Bombay where he met the Progressive poets and started discovering himself as a poet. He shared their socio-political commitment and soon registered his presence. With a potent voice that showed genuineness of purpose, he soon became one of the prominent followers and sponsors of the Progressive Writers Movement. Bombay saw him maturing through stages of life and art. It also saw him emerging and establishing himself as one of its finest lyricists with many evergreen numbers to his credit.

Majrooh staunchly believed in Marxist philosophy. He was imprisoned for his leftist leanings but was later disillusioned with the way socialism had chosen to follow in its own bastions like China and Russia. He then struck his own deal with life and poetry and sought his own voice by striking a fine balance between art and ideology. As ghazal, a literary form of imperishable distinction, was being interrogated during the heydays of Progressivism, he chose to nurse it differently. He discovered an individual tone of voice for himself and a hinterland of contemporary concerns and romantic affiliations. He did this unlike any of his contemporaries. This is what distinguished him from all of them.

Majrooh made a mark with his early poetry itself. He knew the parametres of the traditional poetics well enough to be able to use it to his benefit and acquire an individual voice in the melee of voices broadly represented by Hasrat, Fani and Jigar. He allowed his ghazal to remain a ghazal in its essential make-up. Put differently, he became the mark of ghazal himself. He added to the splendour of ghazal by drawing upon a diction that blended traditional turns of phrase with modernist twists of idiom. In his own way, he kept the Awadh culture alive in his ghazal; in his own style, he emerged as the Meer, both metaphorically and literally, of Progressive and modernist Urdu ghazal.

Decorated with traditional education on the pattern of Dars-e Nizami with emphasis on Arabic, Persian, religious knowledge, and also a degree in Unani medicine, Majrooh chose to start his affair with socialism first, and then pursue a career as a poet and film lyricist. He was rather unhappy about his own reception as a poet. He was painfully aware of the literary establishment and its preferences where he did not figure as he expected. But those who wrote sympathetically on his poetry took adequate cognisance of his worth and assigned him a place that he richly deserved as a true-blue poet of Urdu ghazal.

A recipient of Ghalib Award, Iqbal Samman, Filmfare Best Lyricist Award, and Dada Sahib Phalke Lifetime Achievement Award, Majrooh Sultanpuri penned a lyric for film Mamta in 1966 — Rahein na rahein hum mahka karegey/Ban ke kali ban ke saba baagh-e-wafaa mein… It appears, in retrospect, as if he wrote this for us to commemorate him when we need him the most.