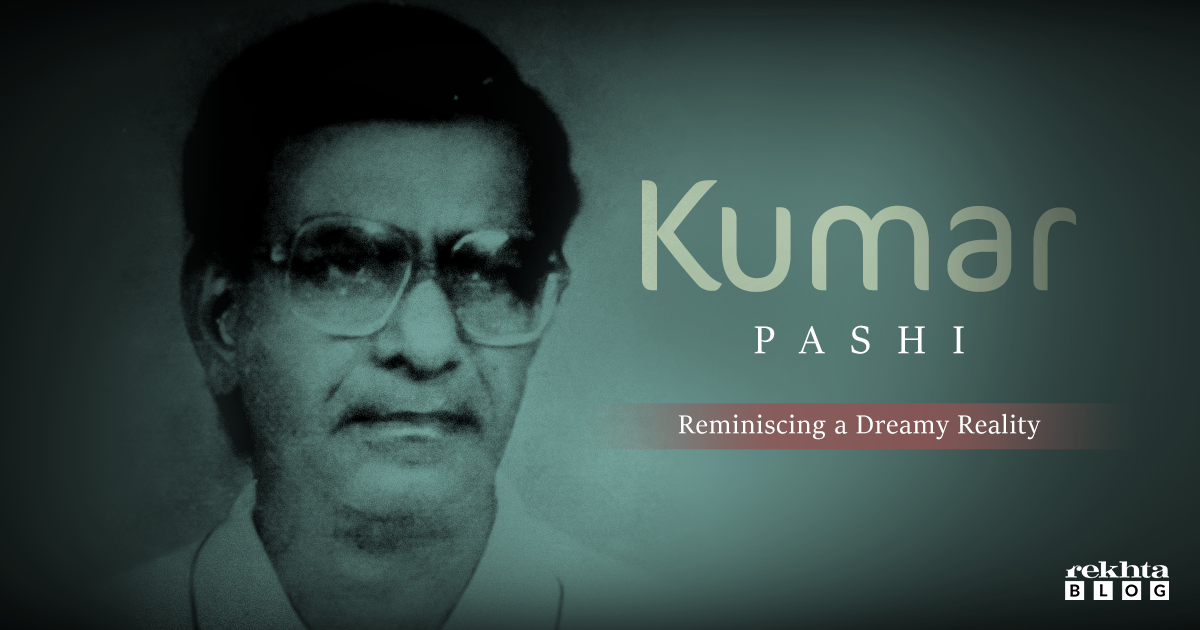 About the evening of 16th September 1992, an onlooker recounted, ‘A man stepped out of his office. He was eagerly pacing towards the railway station. Like many bygone evenings that he had decorated with his presence, he was frequenting towards another one. A radio Mushaira in Hyderabad awaited him. He was to accompany his friends in the train and participate in that Mushaira. As he crossed the Jawaharlal Nehru Road, and passed the telephone exchange at Delhi Gate, he unanticipatedly faltered and fell unconscious. There was blood coming out of his nose. He was rushed to the Jai Prakash Narayan Hospital but did not regain consciousness. First, the train left, then, the friends, finally, in the early hours on 17th September 1992, this man, too, left us, but forever.’

Here, the anonymous onlooker was the poet Chandrabhan Khayal, and the intriguing man was his friend and poet Kumar Pashi.

Born Shankar Dutt Kumar, in Bahawalpur, Pakistan, on 3rd July 1935, Kumar Pashi’s family left their house and belongings in Delhi after the Revolt of 1857. But, as fate would have it, Delhi called him back. At 12 years old, following the mass exodus of the Indo-Pak partition, he returned to Delhi. Unsurprisingly, the scars of migration saw his younger self grow grim and bleak.

The city of Delhi, however, deserves a special mention with regard to Pashi. The city was extremely dear to him, so much so, that he left flat the handsomely paying jobs outside of this city and settled for a humble, averagely paying job with the Delhi administration. He even hated staying elsewhere, for he feared parting from his inbred love. Of course, it was here that both his poetry and literary taste cultivated. And, on one routine day in 1966, his collection of poems titled ‘Puraane Mausamon Ki Aawaaz’, made the scene, and Urdu poetry lovers found a new favorite.

Pashi relished being the focal point of the gatherings that he was a part of. It often felt that everyone else had come only to meet him, he was always busy, and fast-paced, moving here, there, and everywhere. From an onlooker’s perspective, it appeared as if he was talking to everyone, at once!

Among other poet and writers, Pashi’s house had a special identity. It was the one place where everyone was at home. Friends coming over from other cities and states, directly made it to Pashi’s house from the railway station, as if there was nowhere else to go. The reason was that his house felt cordial and homely, the moment someone stepped into his house he wasn’t a guest or a visitor anymore, he was a family member, being where he should have been.

Once a poetess from Pakistan came to stay in Delhi for a long time. Sadly, her known-ones were not too kind to her. The lady retired to seclusion, which proved traumatic. One day, all of a sudden, she turned to Pashi’s doorstep, what next, she found a place to live without care and fear. She made friends with his wife and daughters and openly talked about her troubles. While departing and leaving Pashi’s house she could not contain herself and burst into tears.

The following couplet of Pashi always renders me speechless, it’s as if he had known ‘the truth’ about the city beforehand, and was trying to save it from shambles:

Pashi’s evenings were lit with friends, literature and spirits. He often said, ‘Ek kaDwaa ghuunt pii lene se din bhar ki kaDwaahaT ghaaib ho jaati hai’. He restless nature was a differential part of his element, too. One day when another poet asserted that he wished to publish his poetry collection, Pashi replied, ‘consider it done!’, and within a few minutes they decided upon its name, too.

Kumar Pashi was colored as the poet of Hindu mythos by some critics, but arguably, his poetry encompasses many more shades. From social issues to political, familial and even psychological motifs, his poetry is bedecked with allusions, similes, imageries, and metaphors. Khwab-Tamasha, a three-part Nazm by Pashi, is worthy of earnest attention:

Pashi donned more hats than just being a poet of Ghazals and Nazms, he wrote short stories and was an accomplished playwright, too. And thus, for us readers, there are many more undiscovered aspects of his enigmatic personality, to peek into.

A poet is an evolving figure, and Pashi, too, is evolving with every evolving reader. He himself has said:

Let’s end this heartfelt recollection with a beautiful couplet by the man himself:

Do share your thoughts about the blog in the comment section. And, if you want to leaf through more of Pashi’s works, clicking here can help!