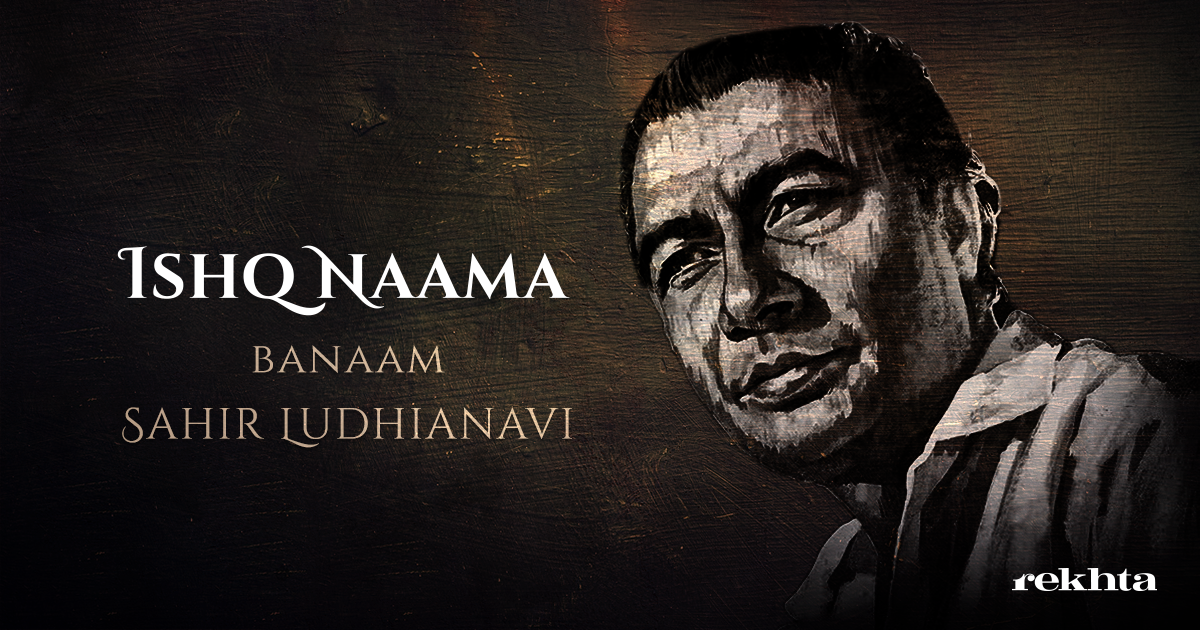 Sahir Ludhianavi was a dreamer and a compulsive romantic who swayed between fantasy and reality without arriving anywhere. The meaning of his life and love lay in travelling rather than arriving. This also imparted a certain character to his poetry and turned him into an archetypal lover and atypical poet for the posterity.

Sahir was passionate about life, as he was about love. Some of his lady-loves were illusory; others were real but in both he remained a deeply aspirational character. Like an innocent human creature, he used to be fascinated by beauteous beings. Like a guileless guy, he used to find his pleasure in waiting for love to engulf him like magic. Like a naïve romantic, he used to be overwhelmed with a little response from the other side and would hurry to share its ecstasies with friends.

Sahir’s first fascination, which soon grew into love, was for a class fellow called Prem Chaudhari. Both of them studied at Government College in Ludhiana. He talked heroically about finding Prem and boasted that she too loved him as much. Naturally, this became a talking point both in and outside the college. This was also the time when he had started writing poems and making some kind of a name for himself as a typical poet of romance and radical ideas. Prem hailed from an affluent but traditional family where the possibility of such a relationship could not be tolerated. Sahir is said to have wandered at all such places in Ludhiana where she could possibly be seen. Unable to find her around, he even went to her village once where she had gone to stay for a while.

When a wandering Sahir reached her home, his roving eyes spotted her walking on the terrace. Prem also saw her but got terribly upset. She feared that if he was found roaming around, he would be treated very severely by her family members. She sent him a message to leave instantly lest he should be put to pain. He returned a forlorn lover but kept pining for her. Soon after that, he got to know that Prem was suffering from tuberculosis. This worried him badly. Much time had not passed before the disease claimed Prem’s life. On getting to know this, Sahir broke totally. After her last rites, he wrote a moving poem “Marghat ki Sarzameen” in memory of his first love where these lines appeared:

Time moved on the way it does and helped Sahir achieve reconciliation with his fate. As he joined life once again, he came across Isher Kaur this time. Both of them idolised each other. This made him take pride in himself and talk about her with pleasure to everyone he knew and cared for. Too deep in his love for her, he remained impatient day and night to meet her. His impatience broke all bounds once. He made an effort to steal a glimpse of Isher and be with her for a while. He went to the college and reached the girls’ lounge where Isher was supposed to be. As ill luck would have it, he was caught by the principal who reached there on getting information about Sahir’s presence near the lounge. He was caught and expelled from the college. As it would appear, Isher could not bring him as many moments of fulfilment as she brought of suffering.

On the surface, their story appeared to reach its end but it was not really so. As love does not really die, and as luck would have it, he came to know about her presence in Bombay where she lived with her husband and kids. Sahir too had shifted to Bombay by that time. He found out her whereabouts and reached her home. Soon, he started frequenting her place. This irked her husband. One day, Isher’s husband took him in his car to a far off place and warned him rather severely about his behaviour and unacceptable relationship with Isher. Sahir thought it was time for him to end his misadventure then and there itself. Both Isher and Sahir felt helpless as they had felt earlier. Sahir is said to have written a poem on seeing her sad once. The poem called “Kisi ko Udaas Dekh Kar” had these lines:

Another story of Sahir’s romance that became rather scandalous concerned his stormy relationship with Amrita Pritam. She was a poet and writer, and also a connoisseur of art and Urdu poetry which brought her close to Sahir. Unlike his other real or imaginary love affairs that Sahir used to propagate himself, it was Amrita this time who talked about her strange relationship with him. She even chose to come out with her story in her autobiographical book Raseedi Ticket, and other writings as well. The kind of curious relationship that Sahir and Amrita shared with each other was destined to come to a natural end. Amrita had her own life with Imroz but she was entirely honest in saying that Sahir was her dream but Imroz was her reality. When separated from Amrita finally after a session of drinks, Sahir wrote some of the most moving lines for her:

After Amrita, Sahir met another writer in Khadija Mastoor who infatuated him. Their relationship matured to the extent that it could have led to their wedding but that too was not to be. Certain differences between the guardians of the two homes created hurdles in their way. As the coming together of the two could not materialise, the way to make another romantic move was open for Sahir.

Sahir had made a name for himself as a poet rather early. With each passing day, he was getting the limelight. It was then that a film magazine published Madhubala’s image on the cover page with Sahir’s collection of poems Talkhiyaan in her hand. This was enough to inflame Sahir’s imagination and help him start dreaming of her. This was enough to make him an imaginary lover of a celebrated lady. As he moved around all over the city showing the magazine’s cover page to his friends, he turned himself into an advertisement. Another facet of his romantic self was seen in his deep infatuation with Nargis which started after his meeting with her in a studio where she had praised his poetry in highest terms.

Here again, he thought he had found his love but that was not more than a mere fantasy. In the story of his long and short obsessions with young and beautiful ladies, we also come across his fascination for Lata Mageshkar and Shakeela Bano Bhopali which appeared and vanished with time.

The last episode in Sahir’s story of love and longing relates to Sudha Malhotra, the extremely talented celluloid singer. This was a story of genuine love for each other but was once again destined to end in disappointment. As social taboos could not be ignored at any cost, Sudha was betrothed and her wedding date was announced. This was precisely when some of Sahir’s friends organised an event one evening in his honour. In this mehfil of friends, Sudha too was invited. She joined the company of friends knowing quite well that this would be her last meeting with Sahir. In this special union of close friends, several singers sang his poems. When they asked Sahir to recite his poems, he chose to recite one of his most celebrated poems “Khubsoorat Mood”:

After Sahir finished his passionate reading of this poem, the audience appeared emotionally moved beyond all description. Faces turned sad, eyes went moist, and an unending silence prevailed. Interestingly, one of Sahir’s uniquely romantic poems of longing—mujhe gale se lagaa lo bahut udaas hoon main—was sung by Sudha Malhotra herself. With all his dreams and aspirations in love and life, Sahir turned into a myth in his lifetime. And remains so till this day.