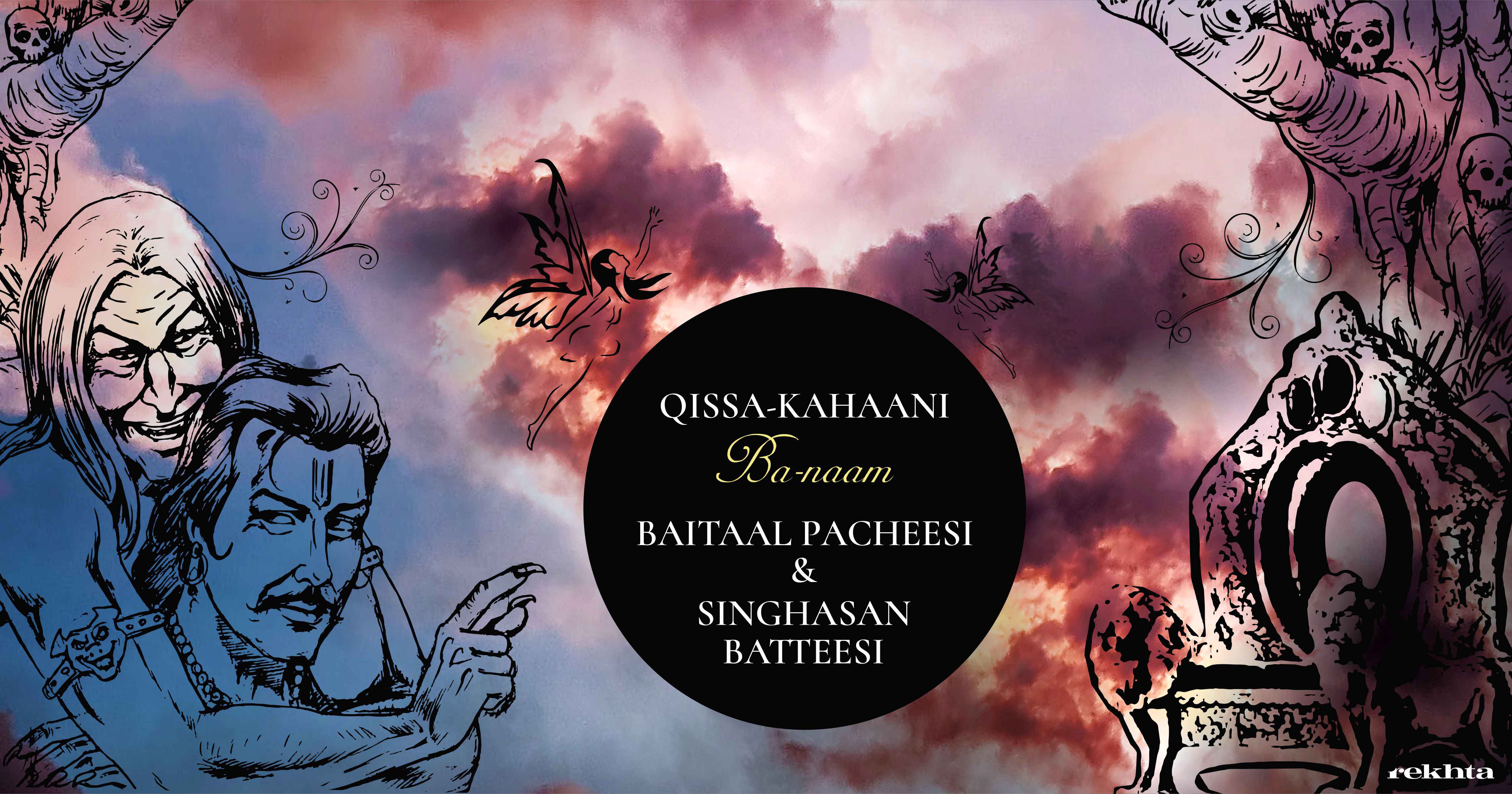 Let us first go to Singhasan Batteesi. Before this frame story came to be recorded variously in prose and poetry especially in the Persian, Urdu, and Hindi languages, it took its birth as an oral tale in the typical Oriental tradition. With the dates of its composition and authorship unconfirmed, it acquired its definite identity only when it was transferred from the oral to the written word in Sanskrit. At some later date, it was translated from Sanskrit into Braj Bhasha and from Braj Bhasha into Nagri. It was subsequently translated into Hindustani, a hybrid of Urdu and Hindi, and was written in the Persian script. When published by the College of Fort William in 1805, it became the prototypical copy from where it went into several publications at least in the Urdu language.

The story of Singhansan Batteesi relates with Raja Bhoj who ruled in the eleventh century. He had discovered a grand throne which actually belonged to the legendary king Vikramaditya. The throne was studded with the statues of thirty-two apsaras who had been turned into stones because of a curse on them. Whenever Raja Bhoj approached the throne, an apsara engaged him with her story of Vikramaditya’s greatness and kept him from occupying it. Every apsara, in turn, tried to suggest that one does not occupy a throne because of the position one holds but because of the virtues one has.

In the latest edition of Singhasan Batteesi in Urdu, Intizar Hussain has posited that it is a co-text of Baitaal Pacheesi. He says further that the two stories should be read together because one relates with Vikramaditya’s story during his lifetime and another with the period after his death. While Baitaal Pacheesi is a collection of twenty-five stories told by a demon called Baital to king Vikramaditya, Singhasan Batteesi is a collection of thirty-two stories told by thirty-two pretty little statues to the same king. Finally, he argues that they take us back, rather metaphorically, to Katha Sarit Sagar–the great storehouse of Indian stories–from where they emerge and take various forms.

The story of Baitaal Pacheesi is as interesting as that of Singhasan Batteesi. It relates with Vikramaditya who had promised a tantric to capture Baitaal, a celestial spirit, who used to hang himself upside down in a tree. Every time Vikramaditya approached him, Baitaal started telling an interesting story to him on the condition that Vikramaditya would not answer the question posed to him at the end of the story. Vikramaditya fell a prey to his trick twenty-four times as he could not check himself from answering the question as he knew the answer. This led to Vikramaditya losing control over him each time and Baitaal going back to tree victoriously.

It is not surprising to find that the stories vary from one narration to another. What is remarkable, however, is that in all their great variety, they mark a grand cultural trajectory of telling-listening tradition. As the stories found popular appeal with the listeners, this tradition continued and matured over the ages. This is well substantiated by the fact that Singhasan Batteesi was narrated, heard, and recorded in different forms (prose and poetry), different scripts (Nagri and Persian), different languages (Urdu and Hindi) at different points of time (medieval and modern) with larger appeal to a substantial mass of readers. Subsequently, this made way for the emergence of a narrative technique and prose style in the Urdu language which could not have been possible had the stories been recorded in a sacrosanct Sanskritised or Persianised language.

With the two examples of Baitaal Pacheesi and Singhasan Batteesi in hand, it should be said further that while oral traditions make way for written narratives, they also discover a language appropriate for themselves in this process. As languages and narratives grow with time, they create and consolidate a literary culture of their own kind. Thus, both language and literature, being the repository of inclusive consciousness of a culture, remain in a constant state of flux at two levels. The first is when a piece of writing is produced, and the second when that writing acquires a new identity in yet another language.