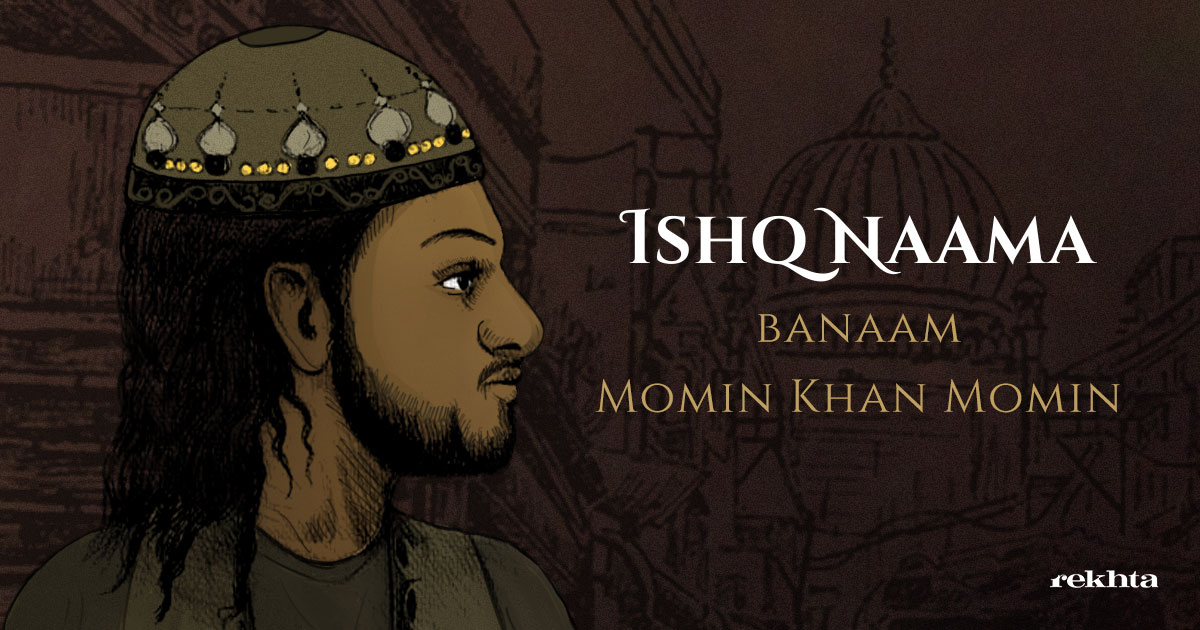 Momin lived to love and loved to live but he could not have luck with any of his beloveds.

Poetry and love go together. Poets are known to make friends but they make better friends with those who inhabit their imagination. No doubt, they are the beloveds– both imaginary and real–since they are worthy of all attention and subject of all adoration. The image of the beloved is probably better reflected in Urdu poetry, especially when the beloved is a real one. And Momin’s beloveds were real. He is one poet who explored love in two of its facets–as a spiritualist and as a romanticist. He saw no contradiction in them which is what makes him an interesting person and a fascinating poet.

Momin was a handsome man, and also colourful by nature. With this fatal combination, he could easily charm women. But it was not the women alone who got drawn towards him; it was he too who found his way with them. In a life of fifty-one years, Momin came across at least five women at different stages of his life. Better than keeping them veiled in metaphoric terms in his poetry, as poets often do, he celebrated his love with his beloveds in open terms and represented himself both as a lover and a beloved. That was something unique to his poetry. 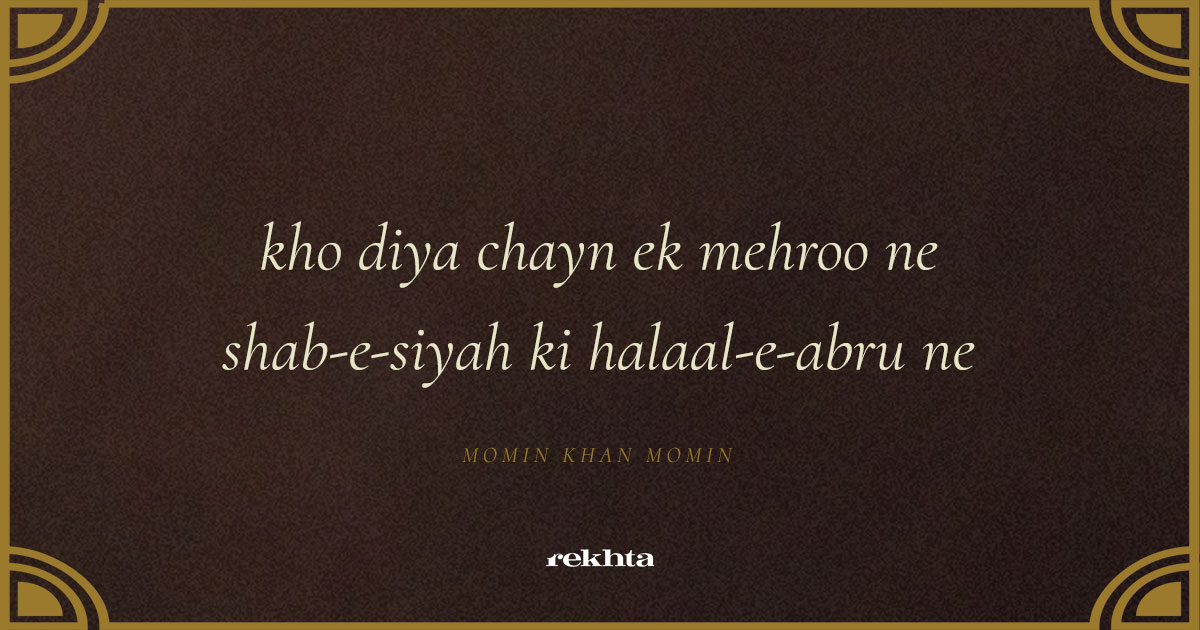 Momin fell first in love at the age of fifteen. As the story of this adolescent love spread, he stopped mentioning her in his shers fearing a bad name for himself and for her. The story was cut short as death laid its cruel hand on her. Momin, the sentimental youth learning the lessons of life, lamented her loss but time put a balm on his bruised heart in due course. He narrated this story of his first love in his first masnawi Shikayat-e Sitam. It is an early work but a genuine record of his emotional turmoil suffered at a young age.

As time passed and Momin reconciled with his fate, he came across his second love. The story goes that he chanced to look at her at the terrace and fell in that proverbial “love at the first sight” with her. He was then spotted meeting her at times. The grapevine did not take time to travel around. He was admonished at home and strictly advised to keep himself in check. When Momin maintained certain distance from her, the young lady felt rejected and turned hostile. Badly shaken by this, Momin chose to defy the imposed norms of his family and went to meet her and win her over but it did not work. This bitter experience of sacrificing his love to maintain the given social norms, gave him the material for his second masnawi Qissa-i gham. 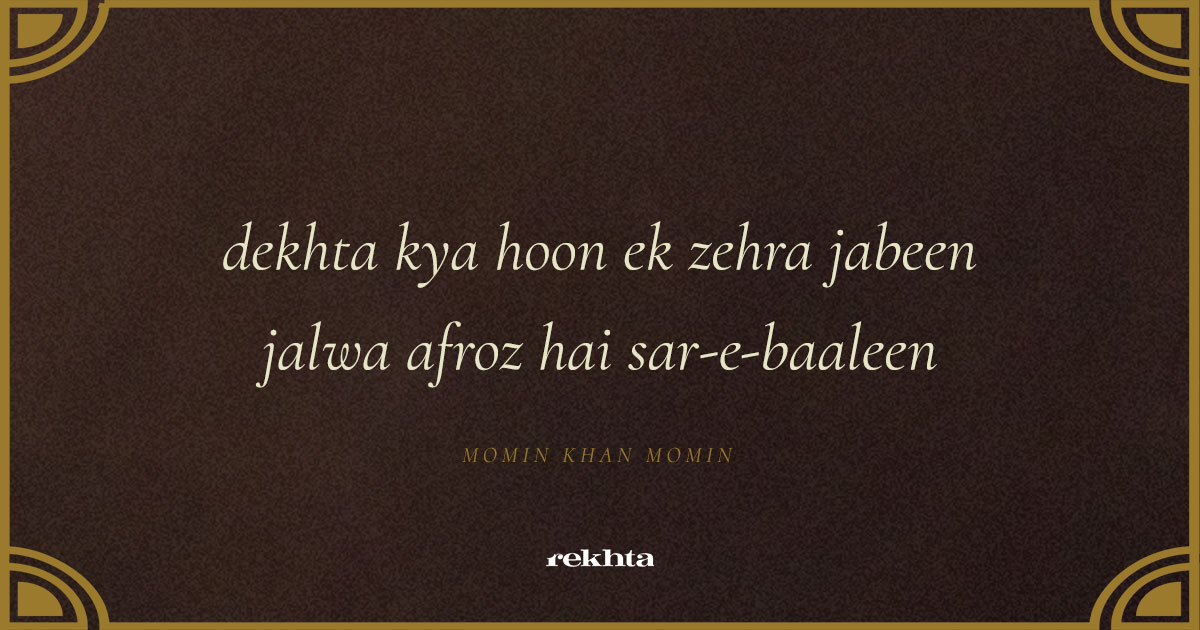 The story of Momin’s third love relates with an unexpected meeting with a young lady. Once, he was on a walk when the young lady looked at him and made gestures from the window to call him. He was both stunned and amused. He found it strange that she should have beckoned so unreservedly and could not well understand how to respond. But he went up to meet her which made way for their subsequent meetings in a row. This young lady was called Ummat-ul Fatima and with whom he developed a deeper relationship at the young age of twenty. Supposedly she was indisposed and had come to Delhi to receive her treatment from a hakeem. Momin was a hakeem and this was the most opportune time for him to make friends with her. As they met, their friendship grew and patient and the hakeem both fell love-sick. It is surmised that she was a poet and chose the pen name of Sahib at Momin’s asking. Being enamoured by this lady, Momin made her the subject of one of his ghazals and addressed her as “sahib”. 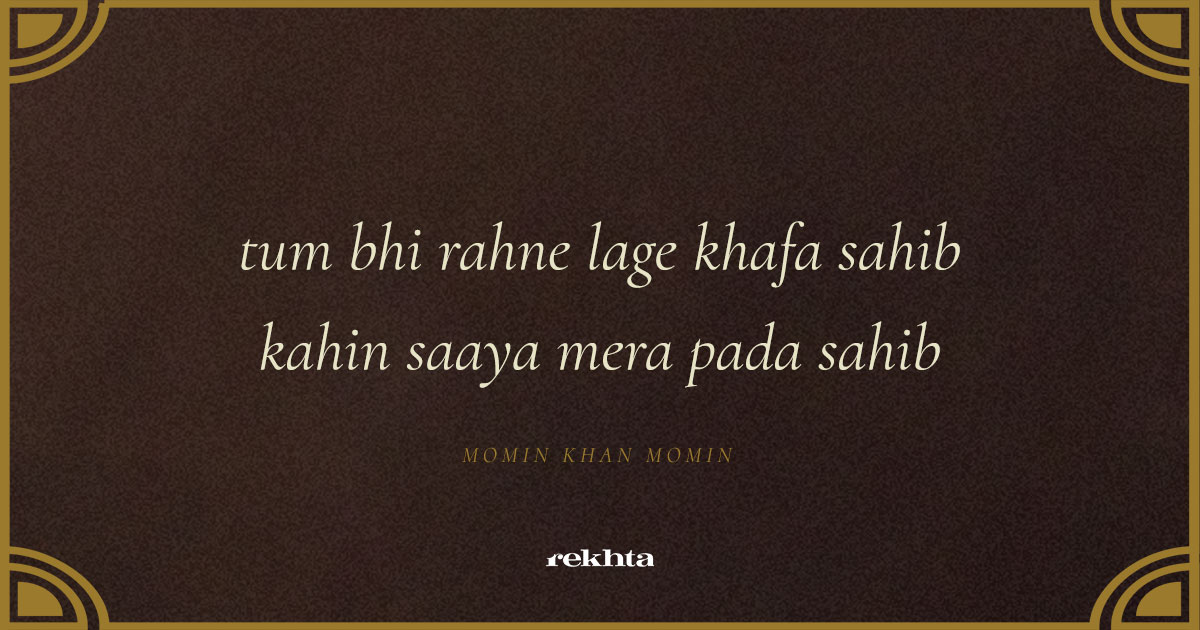 It is said that Ummat-ul Fatima had come from Lucknow and was a prostitute. When the story of their relationship spread out, she developed a cold feet and suddenly left for Lucknow. This put Momin to great pain. He wrote about this love story yet another masnawi Qaul-e Ghameen.

Momin stayed rejected and forlorn for long. His fate took yet another turn when he happened to be a guest at a wedding where he met a beautiful lady. He was enamoured by her and developed a soft corner in his heart for her. When the wedding celebrations got over, there came the time for the lady to leave. While leaving, she asked Momin not to try and keep in touch with her, not even write her a letter, as restrictions at her home would not allow any communication to reach her. This brought suffering to Momin and he fell ill. It is interesting that when Momin recovered from this craving for her, he received a letter from her where she had expressed her desire to meet him. This was much too unexpected. However, they met but their hearts could not. This story of his fourth unrequited love became the subject of yet another masnawi Tuf-e Aatesheen. 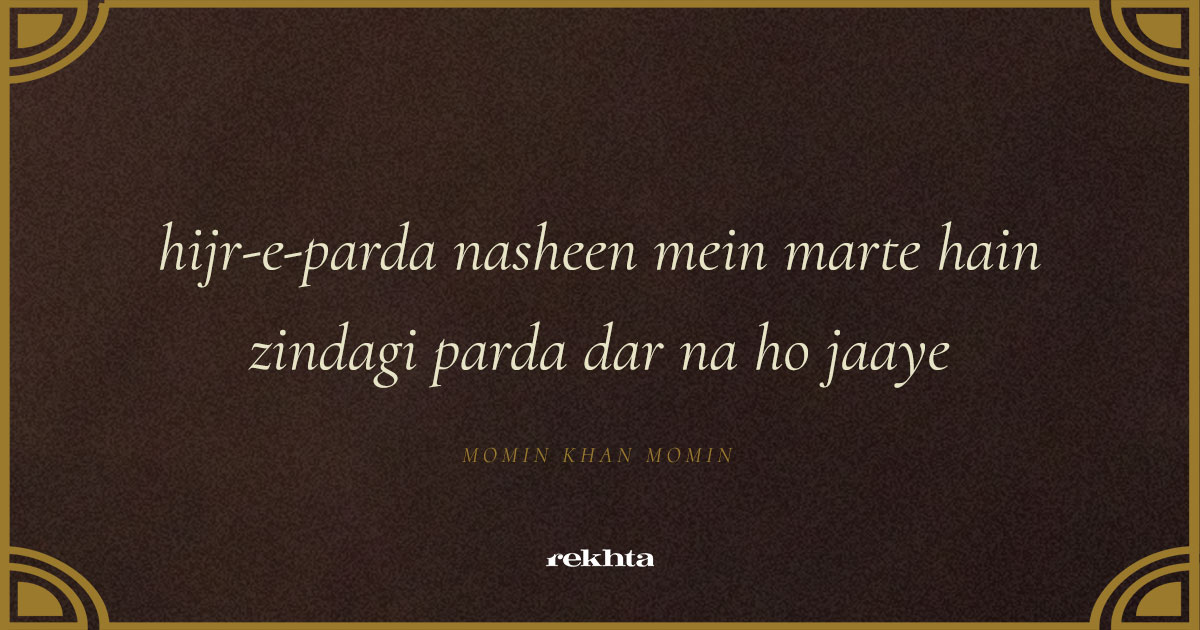 When Momin, the hakeem, got a beloved as a patient; Momin, the astrologer, got another as an admirer of his astrological skill. This time he met a lady who expressed her desire to know about her future. Love has hardly ever gone without a jealous guarding it closely. When the lady who was the subject of his masnawi Tuf-e Aatesheen came to know about this new-found love of Momin, she turned spiteful and frowned furiously. Love has not been known to have prospered if there was a triangle. This fifth love had to end and die its natural death. Momin lived to love and loved to live but he could not have luck with any of his beloveds. The poet in him did not let him forget all his disappointments. He wrote about his sufferings in Feen-e Maghmoom. 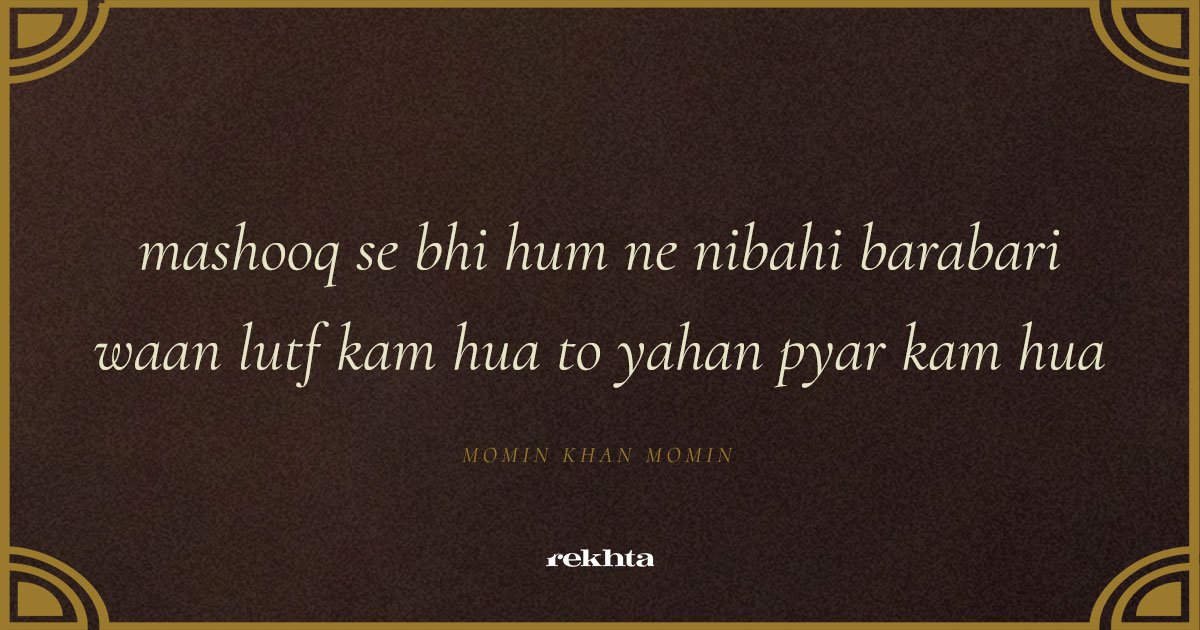 Momin was respected as a poet, a hakim, an astrologer, and a gentleman. He could not have made compromises with his social prestige. And he did not do that. He remains an iconic poet who did not let his love-life go as a story of the past. He immortalised each one of them in his masnawis and ghazals and we recall them when we fall or fail in love. 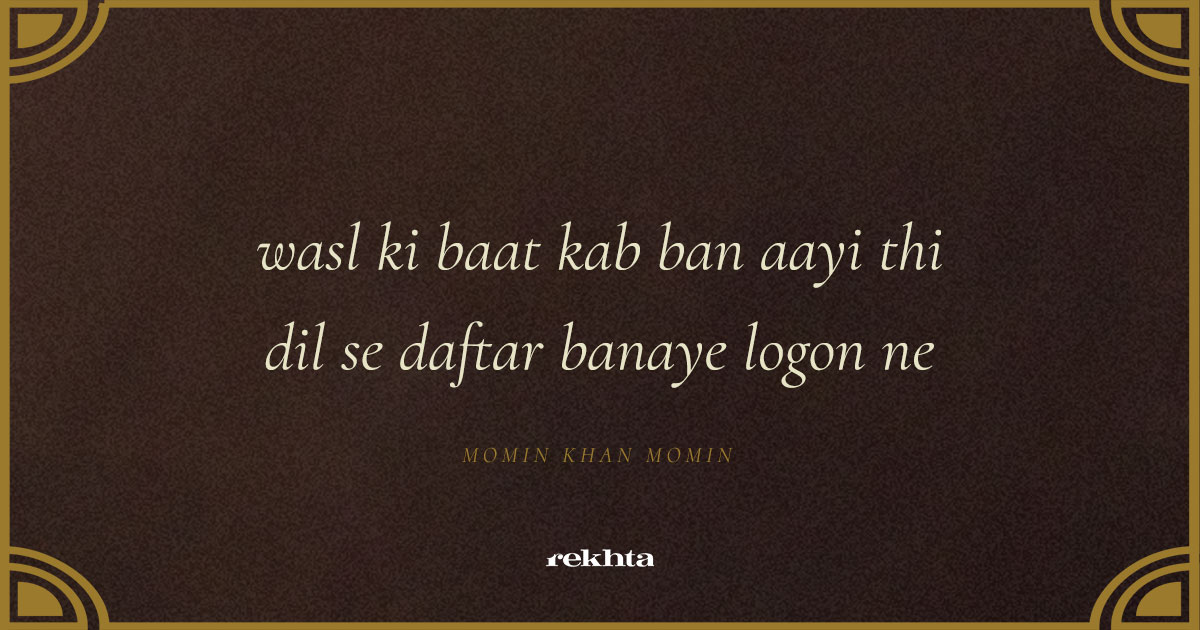