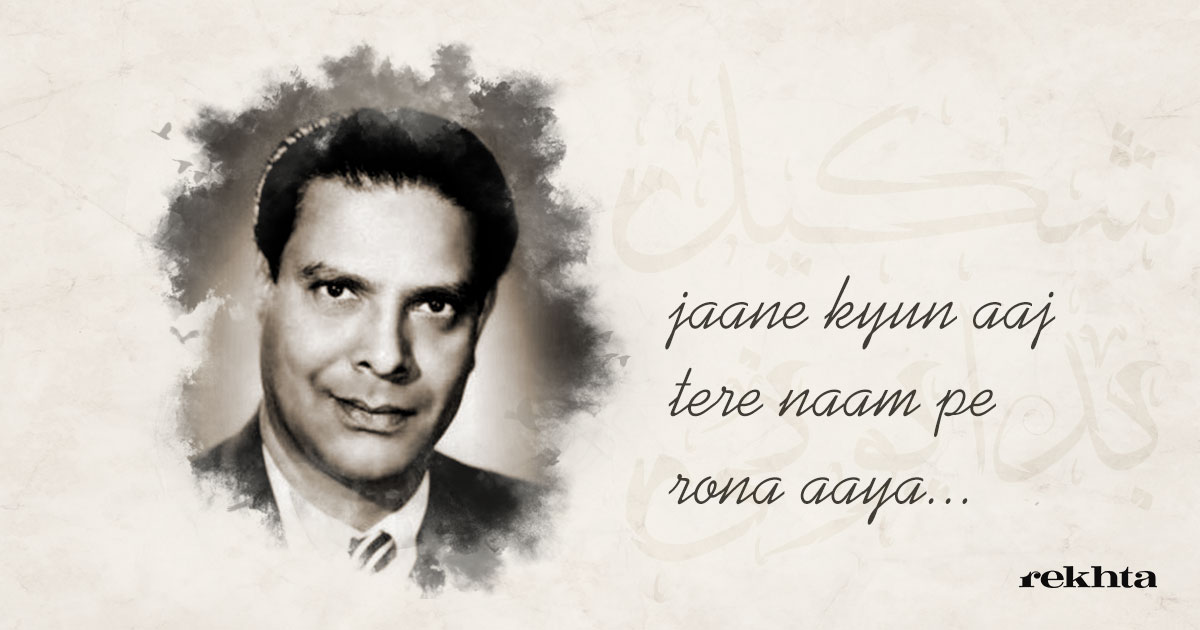 A ghazal aficionado, Shakeel Badayuni developed a dialogue with life in all its romantic glory and grandeur

Places get their names because certain worthy people are born there. Badayun is one such place which nourished and owned many. One of them was Shakeel Ahmad who chose to append the name of his birthplace with his own and become Shakeel Badayuni. Shakeel and Badayun, thus, became complimentary to each other and remain so till this day even though he is no more except that the town has a road named after him. This road reminds its people of the poet who once wrote the finest ghazals of his times and left behind innumerable lyrics that people in Badayun and all over hum every day to seek solace in various emotional states of their lives.

Forty eight years have passed by since Shakeel Badayuni bid us farewell. Born on 03 August 1916 at Badayun, he received his education in Arabi, Farsi, and Urdu at home before passing his Matriculation examination from Mission High School, Sheikhupura, Badayunin, in 1936. The need and desire to acquire higher education took him to Aligarh Muslim University from where he got his degree of B. A. in 1942. It was here that he met with some great teachers and men of literary taste, and discovered himself as one who could serve the muse well. Mushairas, appreciation from friends, and meeting with the supportive and iconic poet of the day, Jigar Moradabadi, helped him nourish his poetic temperament and talent.

Locations and sources of livelihood beckon poets in different manners than others. Not many find their ways of sustenance and survival in poetry but Shakeel did. While he worked for a short period after his graduation until 1946 as a clerk in the Civil Supplies Department, he knew that his destination and his vocation lay elsewhere. A mushaira took Shakeel, the poet, to the then Bombay in 1946 where he won accolades and found benefactors who helped him acquire his roots in two different ways—as a poet and as a film lyricist. This journey from sleepy cities to perky metropolis proved consequential in his life. The new place and its people found him a way to discover himself afresh. 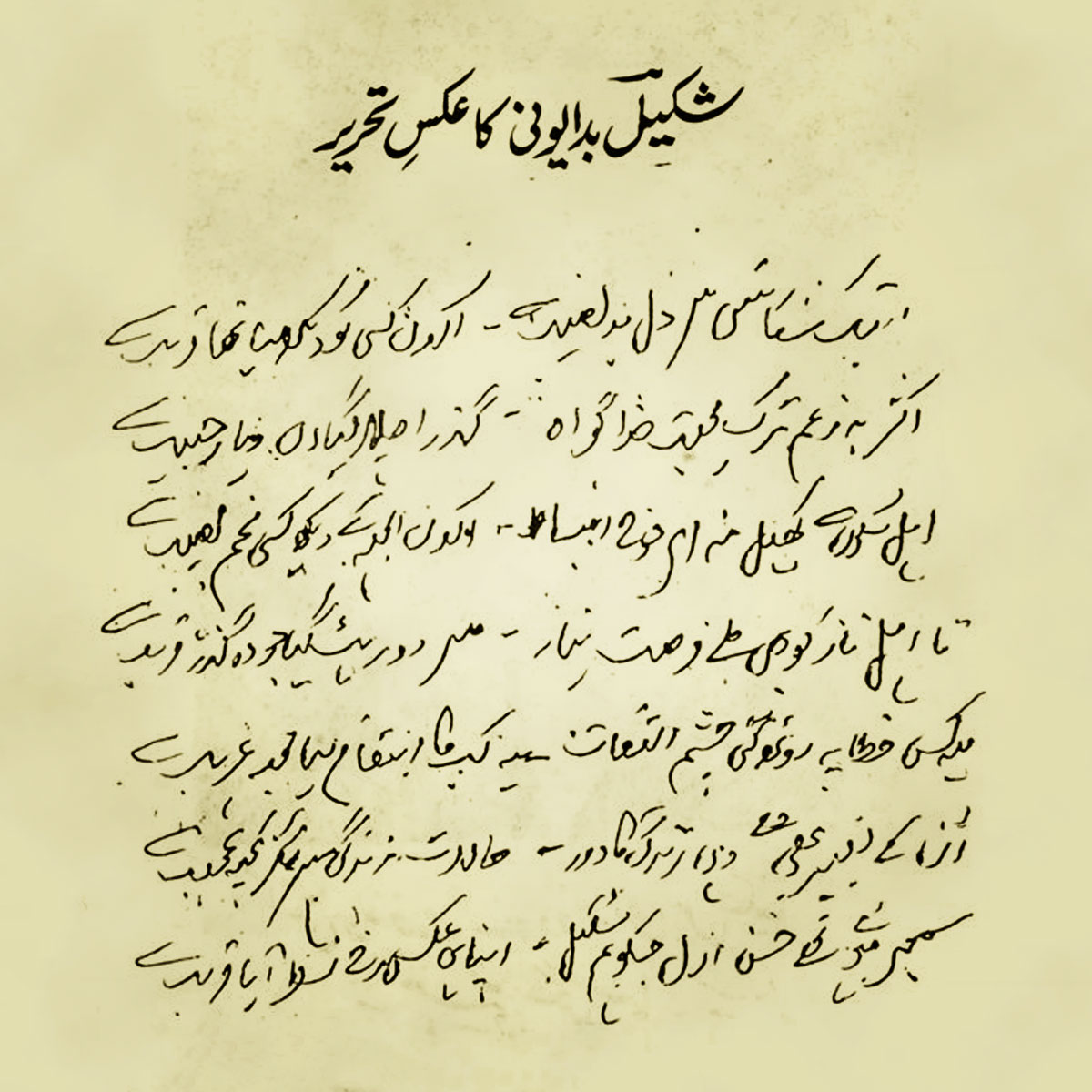 Shakeel Badayuni was a poet much like others. As everyone did, he too sought counselling on his poetry from a distant relative, Ziyaul Quadri Badayuni, who wrote devotional poetry. Although he too wrote devotional poetry and published a volume of poems filled with religious fervour in Naghma-i-Firdaus, he emerged essentially as a poet of ghazal. His ghazal is his own—romantic and reverberating, sweet and silky. Many poets then were politically engaged and socially committed but Shakeel moved along a different trajectory. In his collection of ghazals entitled Ranaa’iyaan, he wrote in no uncertain terms, “I am naturally inclined towards writing ghazals. I have always tried to carve them in a new mould.” Realising his talent as a poet of romantic resonance, Jigar Moradabadi wrote a note for Ranaa’iyaan where he said, “Shakeel’s poetry is natural; not deliberate.” Shakeel continued his affair with the romantic ghazal all along and published them in Ranaa’iyaan, Sanam-o-Haram, Ranginiyaan, and Shabistaan at regular intervals. 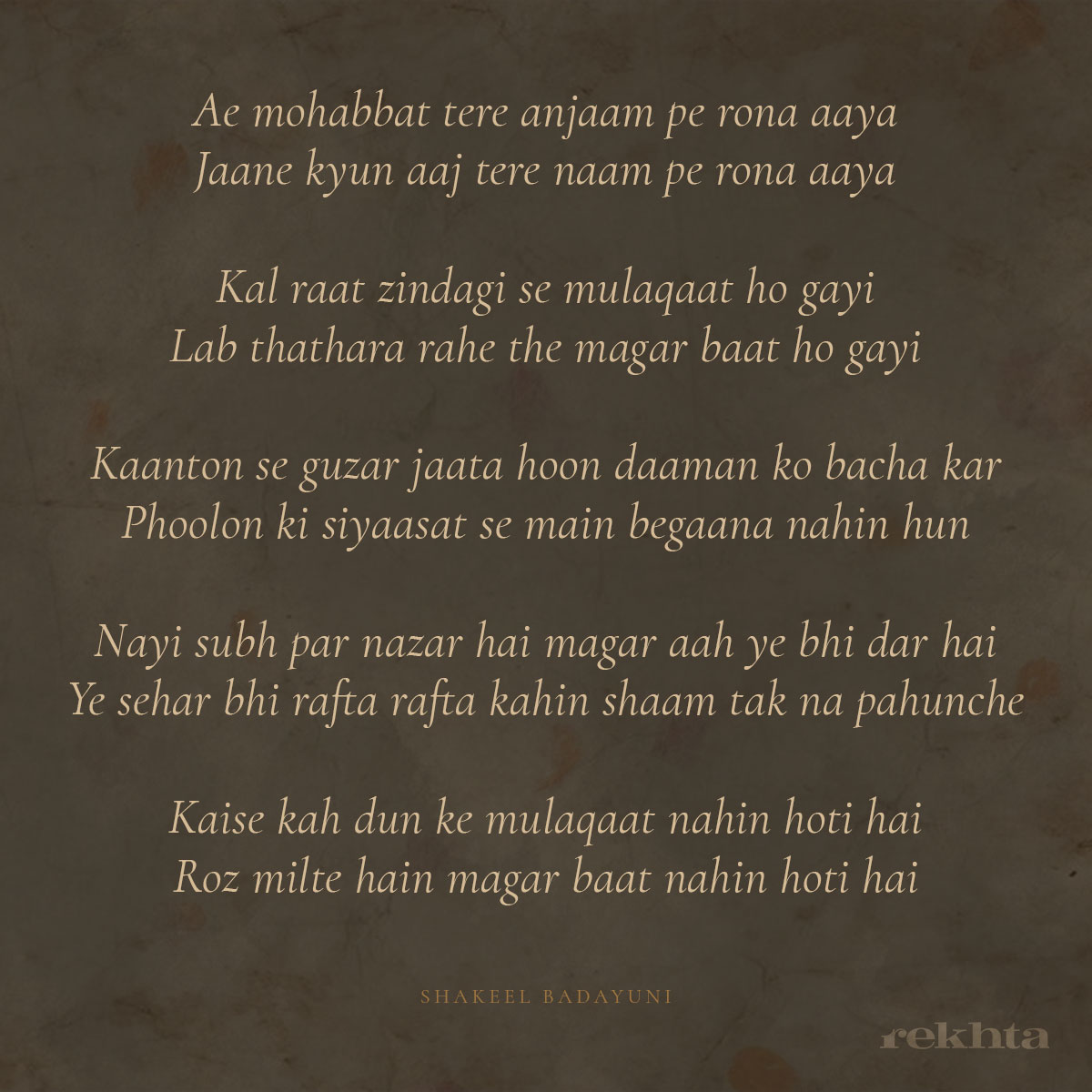 Shakeel Badayuni was a poet just like others, but unlike others he could well use his talent to evolve as a lyricist too, and for that matter a lyricist par excellence. His was a unique way of combining the literary with the popular to create lyrics of lasting value. It has been difficult for the poets to maintain two distinct identities as a poet and a lyricist separately but Shakeel succeeded in doing so exceptionally well. What defined his poetic outpourings in both his avatars was his abiding affair with lyricism. His film lyrics were as melodious as his ghazals and the two approximated each other rather closely. It should be justifiably said that while Shakeel created a set of literary readers with his ghazals, he also brought up a class of listeners with his songs who could appreciate song as poetry, and poetry as song. This imparted a unique place to him where he both entertained and educated the film goers in good taste. This is why while writing his impressions for his collection of film songs called Dharti ko Aakaash Pukaarey, Dilip Kumar pertinently observed, “Hazrat Arzoo Lucknowi was the first to write literary and standard lyrics for films. Among the poets who took it to greater heights, Shakeel Sahib’s role is simply commendable”. 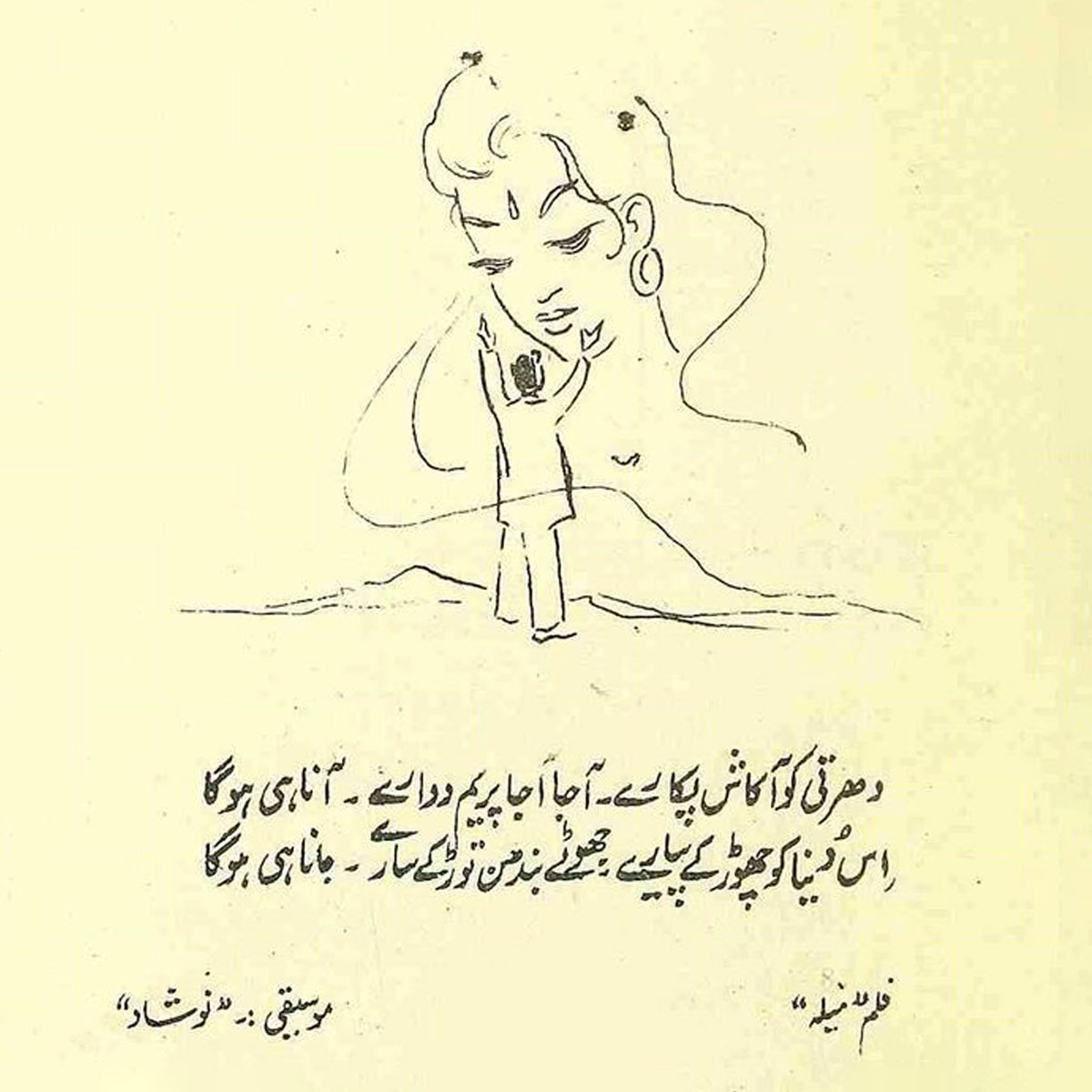 An illustration of “Dharti ko Aakash Pukare” from the film Mela

The two iconic figures, music director–Naushad Ali–and film maker–A. R. Kardar– recognised his talent and gave him a break that rightly took him a long way in the so-called Bollywood. With Kardar’s film Dard his journey began in 1947 for which he wrote the ever green song–Hum dard ka afsaana duniya ko suna denge, har dil main mohabbat ki ek aag laga denge. Another lyric Afsaana likh rahi hoon dil-e beqaraar ka sung by Uma Devi (Tun Tun) proved an instant hit like the first one. The road that lay before him now was one of success through and through. He wrote for some of the finest films that had the most appealing songs. Masterpieces appeared in succession that featured the celebrated actors of the day. As his lyrics stayed on in people’s memory, so did the films like Deedaar, Baiju Baawraa, Mother India, Mughal-e-Azam, Ganga Jamuna, Merey Mehboob, Dil Diya Dard Liya, Chaudahween Ka Chand, Kohinoor, Saheb Bibi aur Ghulam, Bees Saal Baad, Gharana, Ghunghat, Phool aur Paththar, Do Badan. et al. He worked with and for the stalwarts like Ravi Kumar, Hemant Kumar, C. Ramachandra, Mohammad Rafi, Johnny Walker, Dilip Kumar, Wajahat Mirza, Khumar Barabankavi, to name a few . Film lyrics earned him a fortune and brought him Filmfare Best Lyricist Award for three consecutive years in 1961, 1962, and 1963.

Bad times, however, did not spare Shakeel entirely. He was diagnosed with the then dreaded disease called tuberculosis. This was also the time of financial crisis for him. His friend Naushad came forward; he offered him to write from the sanatorium in Panchgani and arranged payment that was double his given fee. This was Naushad’s appreciation for a great friend. Later, Shakeel suffered from incurable diabetes which claimed him for all times on 20 April, 1970 at Bombay Hospital. Shakeel’s lyrics are the lyrics of an irreversible past—only to be lovingly remembered and emotionally savoured.